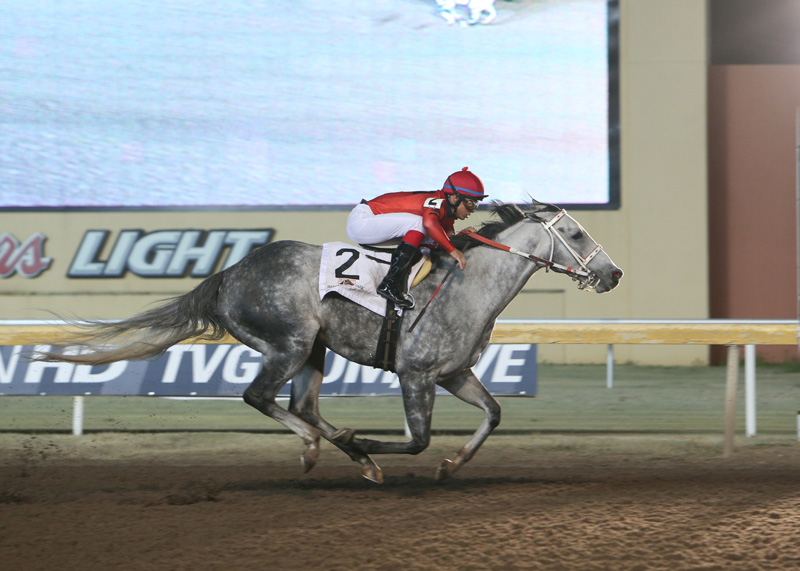 As expected, in landslide voting, Welder is the Horse of the Meeting for the recently completed 2018 Remington Park Thoroughbred Season. Media covering the season and Remington Park racing officials and management participated in the ballot process.

In addition to being named the Horse of the Meeting, Welder also was voted best in three other divisions: Champion Older Male, Champion Sprinter and Champion Oklahoma-bred. The 5-year-old gray speedster is owned by Ra-Max Farms of Claremore, Okla. and is trained by Teri Luneack.

Jockey David Cabrera handled Welder in his four consecutive stakes wins as he became the first horse in Remington Park history to win four stakes races in the same season. Welder won the $70,000 Remington Park Turf Sprint (five furlongs) on a sloppy main track in his season debut on Sept. 7; the $150,000 David Vance Stakes (six furlongs), handling open company and shippers from around the country on Sept. 30; the $130,000 Oklahoma Classics Sprint Stakes (six furlongs) on Oct. 19, and the $70,000 Silver Goblin Stakes (6-1/2 furlongs) on Nov. 16. All but the Vance were stakes races for eligible Oklahoma-breds.

Welder is by The Visualiser from the Tiznow mare Dance Softly.

Gianna’s Dream – Champion Older Female & Champion Turf Performer
Joining Welder as the only competitor this season to win multiple honors, Gianna’s Dream once again shipped in to win a pair of turf stakes. The 5-year-old mare won both the $70,000 Bob Barry Memorial on Sept. 30 and the Oklahoma Classics Distaff Turf (over a sloppy main track) on Oct. 19 to pull in two honors. Both of her wins were facing eligible Oklahoma-breds.

Owned by Jordan Wycoff of Fort Washington, Pa. and trained by Michael maker, Gianna’s Dream was ridden by Jose Ortiz in the Bob Barry Memorial and then Corey Lanerie in the Classics Distaff Turf. She is a daughter of Twirling Candy from the Rahy mare Untamed Beauty.

Owned by Willis Horton Racing of Marshall, Ark. and trained by National Hall of Famer Steve Asmussen, Long Range Toddy won the $100,000 Clever Trevor Stakes (seven furlongs) on Nov. 3 and then the richest race for juveniles, the $400,000 Springboard Mile on Dec. 16. The Kentucky-bred colt by Take Charge Indy from the Unbridled’s Song mare Pleasant Song earned 10 qualifying points for the 2019 Kentucky Derby with his Springboard triumph.

Jockey Richard Eramia rode Long Range Toddy to three straight wins during the Remington Park season, including his maiden-breaking voyage, at one mile, on Sept. 28.

Owned by Douglas Scharbauer of Midland, Texas and trained by Bret Calhoun, Cowgirls Like Us won the Trapeze Stakes under Iram Diego. She is a Kentucky-bred daughter by My Golden Song from the Gold Legend mare Nothinbettertodo.

Owned by G M B Racing of Metarie, La., Lone Sailor rallied down the middle of the stretch to win the Oklahoma Derby by a head under jockey James Graham. Trained by Tom Amoss, Lone Sailor won his first race of 2018 in the Oklahoma Derby after many near misses in top company, including: second by a nose in the Grade 2 Louisiana Derby at Fair Grounds in March; another second by a nose in the Grade 3 Ohio Derby at Thistledown in June; a third-place run in the Grade 1 Haskell Invitational at Monmouth Park in July and another runner-up in the Grade 3 Super Derby at Louisiana Downs in early September.

Lone Sailor is a Kentucky-bred colt by Majestic Warrior from the Mr. Greeley mare Ambitious.

Owned by the Carencro, La. partnership of Whispering Oaks Farm, Team Hanley, Bradley Thoroughbred and Madaket Stables, She’s A Julie is trained by Steve Asmussen and was ridden to her win in the Remington Park Oaks by Ricardo Santana, Jr.

She’s A Julie is a daughter of Elusive Quality from the Dubai Millennium (GB) mare Kydd Gloves.

Sure Thing Sheila – Champion Claimer
A 4-year-old Kentucky-bred daughter of Archarcharch from the Stephen Got Even mare Broad, Sure Thing Sheila won four straight races during the season for claiming prices ranging from $10,000 to $25,000 while also winning a starter allowance race.

Sure Thing Sheila won her first three races for Colleen Davidson of Grant, Okla. and trained by Brent Davidson before being claimed for $25,000 on Oct. 26. She then won for her new owner on Nov. 14, M and M Racing of Colleyville, Texas and trainer Karl Broberg.

Jockey Freddy Manrrique rode in her first three wins while David Cabrera handled the assignment in her final victory of the season. Versatile, Sure Thing Sheila alternated her wins over the main track and turf, all at the distance of one mile.

Remington Park live racing is now on hiatus until the 2019 American Quarter Horse, Paint and Appaloosa Season begins on March 8.