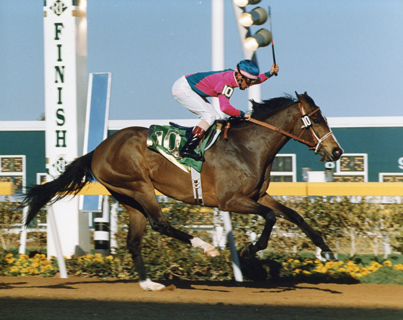 Oklahoma-bred Clever Trevor, who won the first Remington Park Derby in 1989, was euthanized on Friday night due to deteriorating health, according to an article by Daily Racing Form. He was 30 years old.

A 1986 gelded son of Slewacide bred and owned by Don McNeil, Clever Trevor won half of his 30 career starts and banked nearly $1.4 million. He began his racing career at Ak-sar-ben in Omaha and then took his home state by storm with stakes wins at Blue Ribbon Downs and Remington Park as a 2-year-old.

As a 3-year-old, the Donnie K. Von Hemel trainee won the inaugural Remington Park Derby (now the Oklahoma Derby) and raced in the 1989 Kentucky Derby (G1), where he finished 13th. The gelding rebounded to win the Grade 2 St. Paul Derby in Minnesota and Grade 1 Arlington Classic in Illinois before running a game second to Easy Goer in the Grade 1 Travers Stakes at Saratoga. He also ran in the 1991 Breeders Cup Sprint (G1), finishing sixth.

After retiring from the track, Clever Trevor spent most of his remaining years on the farm of Donnie K. Von Hemel, along with his wife, Robin, and daughter, Tess.

“He was a brilliant,” Donnie told Daily Racing Form. “He was a great racehorse who really put a young trainer on a successful path. I was very fortunate that he came along during the early part of my career, and I’ll forever be indebted to that horse. He meant so much to me and my family. It’s a sad day, but he had a wonderful life.”

Clever Trevor, Von Hemel and McNeil, who passed away last year, are all members of the Oklahoma Horse Racing Hall of Fame. Remington Park annually honors the gelding with the Clever Trevor Stakes.