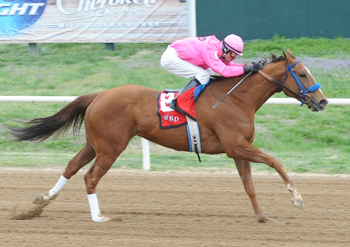 Again proving her affinity for Will Rogers Downs, Doyle Williams’ homebred More Than Even captured Monday’s $53,000 Wilma Mankiller Stakes for fillies and mares at the Claremore track. This marked the fifth win in six career starts for the 5-year-old Oklahoma-bred Stephen Got Even mare at Will Rogers.

Ridden by Cliff Berry for trainer Roger Engel, More Than Even drew clear to a 3 ¼-length win in a time of 1:10.54 for six furlongs. Sent off as the even money favorite, the mare improved her career record to 27-12-4-2 with earnings of $376,768. Her only defeat at Will Rogers came in last year’s Wilma Mankiller, and her four other wins at the track include two allowance contests, the RPDC Classic Distaff Stakes and Cherokee Casino Will Rogers Downs Classic Distaff Sprint. She is also a two-time stakes winner at Remington Park.

Beau Ravelle, a shipper from Delta Downs, set the early pace and held on for second. Teardrop, a daughter of Tapit coming from Oaklawn Park, took third.