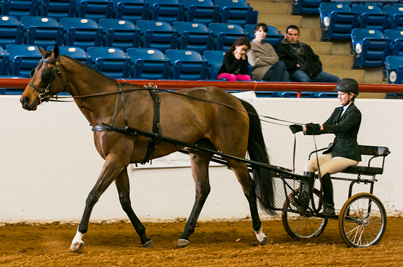 The 2015 Battle of the X’s Trainer’s Challenge and All Breed Horse Show was held March 21 and 22 in Fort Worth, Texas, at the John Justin Arena, a part of the Will Rogers Equestrian Center. Hosted by Remember Me Rescue of Burleson Texas, the Trainer’s Challenge affords the opportunity for off-the-track Thoroughbreds (OTTBs) to be paired with trainers from across the country to compete for $10,000 in prize money.

In the months leading up to the challenge, all competitors are spotlighted and adoption applications are accepted for the right to bid on the contestants at the conclusion of the challenge. Proceeds benefit Remember Me Rescue, as well as Thoroughbred Athletes, for their own entry. This year’s challenge had eight horses and trainers competing for top honors.

At the conclusion of the Battle of the X’s, the 2015 champion was Oklahoma-bred Miss Zanjero (Zanjero x Astonishment by Golden Missile), a 2010 filly entered by Thoroughbred Athletes Inc. of Guthrie, Oklahoma; trained by Wendy Thompson of Piedmont, OK. This team was also Overall Highpoint Winner at the Battle of the X’s All Breed Horse Show.

Following the Battle of the X’s Trainer’s Challenge, Miss Zanjero was offered at auction to approved adopters and was purchased by Lisa Hunt of Edmond, OK, who plans on continuing the horse’s show career by participating in the second leg of the Red River Shootout and 2015 Sport of Kings Challenge, held June 19-21 at Remington Park. The Sport of Kings is an annual event highlighting the Thoroughbred horse and benefitting Thoroughbred Athletes.

Miss Zanjero was discovered at the Jones Horse Auction in Oklahoma by a representative of Helping Hands Equine Assistance in late September 2014. The Jones Auction is well known in the area due to a high number of horses sold through their facility being purchased by kill buyers who purchase and ship weekly semi loads of horses to Mexico for slaughter.

Miss Zanjero demonstrated her versatility and talent to the five judge panel when she entered the show ring pulling a cart. After making a few laps, she was saddled and proceeded to demonstrate her jumping skills, highlighting her ability by jumping gymnastics; skinny jumps, walls, etc.

There were seven other talented Thoroughbreds in the 2015 Battle of the X’s Challenge this year. Master Tone, a 3-year-old Oklahoma-bred, with trainer Lee Johnson wowed the judges with his bridleless jumping demonstration and took home Reserve Champion Honors. Taking home third place honors was Devil’s Apprentice and Kim Flowers Alford with a great jumping and dressage demonstration. Fourth place went to Son of Amour and Michelle Noland Houpt who showed the judges a stellar jumping performance. Texas Citizen and Cassie Black took home fifth place honors after an eighties inspired “Back to the Future” performance. Sixth place went to Jonesicula and trainer Elliot Holtzman, who despite an injury gave a great in hand performance that showed Jonesicula’s full potential. Angelterre, aka Superman, and trainer Melissa Griffith gave a great Superman inspired performance. In eighth place was Sweet Whiskey Brown and Ashley Schmidt Beall who gave a great performance highlighting Whiskey’s past, present, and future.

Huge congratulations to all the trainers who spent the time training these wonderful horses. Funds raised by the auction held immediately following the Battle benefits Remember Me Rescue.

Remember Me Rescue was formed by Dallas and Donna Keen to assist retired and injured racehorses after their careers at the track are over. The program accepts, rehabilitates, and retrains ex-racehorses with the hopes of finding them new homes with responsible owners.

Photos of the event can be viewed and purchased at www.terricage-photography.com and more information can be found at www.teamkeen.com.