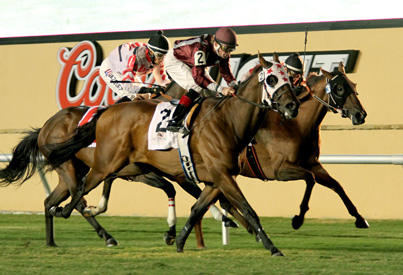 Speedy Oklahoma-breds had the main stage Friday in the $50,000 Remington Park Turf Sprint, battling five furlongs over a good course. Okie Ride waited until the top of the stretch, then quickly moved to the front for good in winning the race for a second consecutive year.

Owned by the Richter Family Trust of John & Kris Richter of Perkins, Okla. and trained by Kenneth Nolen, Okie Ride was ridden confidently by Cliff Berry. The 7-year-old gelding sat third through the first three-furlongs of the race a couple lengths off pace-setting 10-year-old veteran Fifth Date, who moved a quarter-mile in :21.82 seconds and a half-mile in :44.13 seconds.

Okie Ride came off the turn in fine order according to Berry. “My horse broke good and he settled well, so I knew I’d have something in the stretch. He kind of coasted in there that last little bit. He ran great.”

Handling five furlongs in :56.35 seconds, Okie Ride won by a half-length over a late-charging Yukonrun with the pace-setting Fifth Date finishing third, three-quarters of a length from the winner.

Okie Ride ran a promising third in his season debut, the $75,000 David M. Vance Sprint against open company rivals. Moving back to Oklahoma-bred company to win the Turf Sprint again, Nolen believes the rest of 2014 is shaping up well for Okie Ride. “The old horse, he’s really doing well this year and is really a little happier this year than he was last year.”

The Turf Sprint was the 12th career win from 29 starts for Okie Ride, a son of Candy Ride (Arg) from the Geiger Counter mare Tic Tic. The stakes score was his 10th overall win at Remington Park as he climbs into the elite company of Thoroughbreds with double-digit career win totals in Oklahoma City. Okie Ride picked up $30,000 to move his overall total past the half-million mark with $506,294.