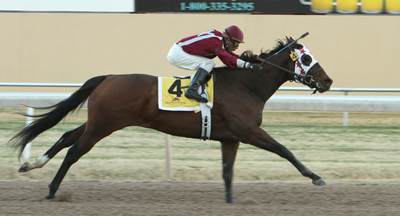 Owned by the Richter Family Trust of Perkins, Okla. and trained by Kenny Nolen, Okie Ride was ridden by Luis Quinonez, who put him into position going into the lone turn of the 6 ½-furlong Silver Goblin Stakes. Just outside of Fifth Date, Okie Ride felt a little pressure from his rival as they moved away from the others.

“The horse to my inside (Fifth Date) came out on us a little in the turn but I knew I had some horse,” Quinonez noted. “When I asked him to run he ran a good race for me.”

Stickrossmountain set the early pace in the Silver Goblin, handling the opening quarter-mile in :22.65 seconds. That was the only fraction he would set as Fifth Date and Okie Ride rolled past him going into the turn, hitting a half-mile in :45.72.

Fifth Date and Okie Ride moved to the top of the stretch together but the duel ended in just a few more strides. Okie Ride hit the three-quarter mile split in 1:10.08 then drew off over the final furlong to score easily, crossing the finish in 1:16.62 over the fast track.

Okie Ride won his third consecutive race, adding the Silver Goblin to his most recent score against Oklahoma-breds, the Oklahoma Classics Sprint in October. His streak started with an open company allowance win in September after he ran a solid second to Alsvid in the $100,000 David M. Vance Sprint in August.

The Silver Goblin, named after the millionaire Oklahoma-bred and multiple graded stakes winner of the mid-1990s, was the ninth career win for Okie Ride from 20 attempts. The seventh win at Remington Park was worth $30,000 to Okie Ride, moving his overall earnings to $370,662.

Okie Ride was bred in Oklahoma by the Richter Family Trust. He’s by Candy Ride (ARG) from the Geiger Counter mare Tic Tic.

Quinonez enjoyed a three-win afternoon on Black Friday. His first win was on Belle Muse ($7 to win) in race seven with his natural hat trick coming in the ninth race on Slew Of Cinnamon ($4.20). The Okie Ride win in the Silver Goblin Stakes was in between those two events as the eighth race on the card.

Quinonez now has 55 wins on the season, second to Cliff Berry who leads the jockey standings with 58 wins.