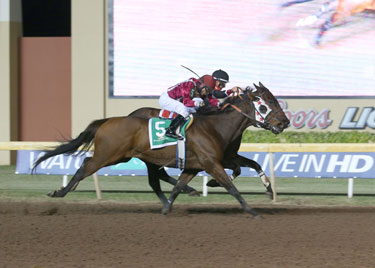 Oklahoma-breds were featured in multiple stakes races on the Friday night card at Remington Park. The older horses had their spot in the $50,000 Silver Goblin Stakes with Okie Ride gaining his third career victory in the race, winning a nose-bob photo over Imahit.

The 9-year-old Okie Ride ran his normal race, sitting just off the pace and making a move for the front coming out of the turn. Owned by the Richter Family Trust of Perkins, Okla. and trained by Kenny Nolen, Okie Ride had to run down Imahit in the stretch. Jockey Luis Quinonez put Okie Ride into a relentless drive to catch Imahit and win by a nose in the 6-1/2 furlong event.

“This horse knows how to win,” Quinonez noted. “Turning for home, he was right there. I was pretty confident he was going to get there.”

Nolen has always been impressed with his veteran star who continues to get the job done, despite constantly facing younger, and quality, competition. “It was a little hard to catch Imahit, he’s a good horse. The old man just knows how to get up to the wire.”

Imahit set quarter-mile fractions of :22.43 for the opener, :45.17 for a half-mile and 1:09.71 for six furlongs. Okie Ride continued to cut into the one-length lead Imahit took into the stretch, eventually hooking up and battling in the final strides to the line, winning in 1:16.13 over a fast track.

Okie Ride, won the Silver Goblin for the first time since 2013. He won the race initially in 2012. The victory gives him 14 career wins at Remington Park, putting him just one behind the all-time record of 15 held by Highland Ice and Elegant Exxactsy.

Okie Ride picked up $30,000 for his third career Silver Goblin victory. He has now made $789,714 from 41 lifetime starts. The score was his 16th overall. Bred by the Richter Family Trust, Okie Ride is a gelding by Candy Ride (Arg.) from the Geiger Counter mare Tic Tic.

The $75,000 Don McNeill Stakes, for 2-year-old Oklahoma-bred colts and geldings going one mile, went to Hallelujah Hit. He rallied to win the event by one length over even-money favorite Rowdy The Warrior.

Owned, trained and bred in Oklahoma by C.R. Trout of Edmond, Hallelujah Hit sat off the pace for the first six-furlongs before jockey Alex Birzer made his winning bid. Irish Capital set the opening quarter-mile fraction of :23.85 and the half-mile in :48.44 before giving was to Ro Ros Nightlife who made six furlongs in 1:13.60 before giving way in the stretch to Makin The Dough. Hallelujah Hit was always positioned just a length or two from the lead and responded when asked into the homestretch.

“The race set up perfect for us,” Birzer said. “At the top of the lane, once I wheeled out and got in the clear, he just made a big, powerful run.”

Crossing the finish in 1:38.50 for the mile over a fast track, Hallelujah Hit held off Rowdy The Warrior who was wiped out at the start by another rival, forcing him to run from the back of the pack, spotting his rivals many lengths due to the unfortunate beginning.

The win in the Don McNeill Stakes is the second straight for Hallelujah Hit, a gelding by Mr. Nightlinger from the Sahm mare Halo Hit. The winner’s share of $45,000 increased the earnings over four starts for Hallelujah Hit to $79,173.

The Don McNeill Stakes is named in honor of the late owner and breeder who was so prominent in Oklahoma-bred racing, represented by many talented horses but especially by Clever Trevor and Mr. Ross, among others.

In her last start, Sweet Posse broke her maiden status in October to give her trainer his 1,000th career victory at Remington Park. Friday night, she gave trainer Donnie Von Hemel yet another local stakes triumph when she won the $75,000 Slide Show Stakes for Oklahoma-bred 2-year-old fillies.

Owned by The Elkstone Group of Greenville, Del., Sweet Posse was ridden by Jareth Loveberry. The filly broke her maiden going one mile in mid-October and that experience, at the same distance as the Slide Show Stakes, served her well. She sat in a stalking position, a couple of lengths behind the pace-setting Okie Diva, until the middle of the second turn. Okie Diva managed the first quarter-mile in :23.39 and the half-mile in :46.85 before giving way to the winner.

Sweet Posse had the lead at six furlongs, making the fractional split in 1:12.69, as Okie Diva began to falter in her first attempt longer than six furlongs. Sweet Posse then opened a dominant advantage in the stretch, eventually winning by 8-1/2 lengths and stopping the clock in 1:40.60 over the fast track. Okie Diva held second with Kowgirl Whiskey along for third, 17-3/4 lengths behind the winner.

At 5-2 odds in the betting, Sweet Posse paid $7.40 to win and $2.10 to place. Okie Diva, the heavy wagering favorite at 1-5 odds, paid $2.10 to place. There was no show wagering in the Slide Show Stakes as only four starters contested the event.

The Slide Show is named in honor of the Oklahoma-bred filly who was near perfect in her career at Remington Park, winning 10 of her 11 starts, and seven stakes events, here in the mid-1990s.

Sweet Posse has now won two of four starts. Bred in Oklahoma by Tracy Strachan, Sweet Posse is by Caleb’s Posse from the Blushing John mare Plenty Sweet. She made $45,000 in the Slide Show Stakes to up her total earnings to $76,533.