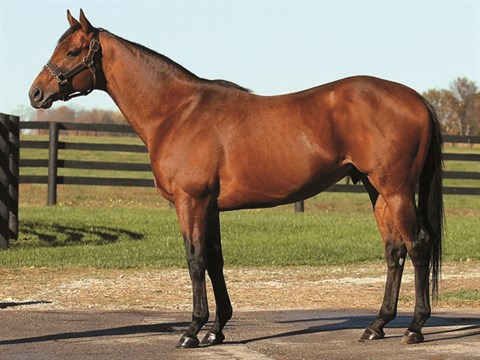 Fans of food you’d find at the state fair probably had a good day on Saturday at Belterra Park as Funnel Cake, a colt from the first crop of Ohio stallion Kettle Corn, broke his maiden to become his sire’s first winner. The colt won the $22,300 maiden special weight for Ohio-bred 2-year-olds at odds of 7-1 with Perry Ouzts in the irons for trainer Tom Amoss.

Bred by John Hicks, William Hart and William Martin, Funnel Cake has earned $14,880 in two starts for owner Maggi Moss. He sold twice at Keeneland last year, first for $18,000 in January and then for $35,000 in September.

A son of Candy Ride (Arg), Kettle Corn got better with age on the track and ended his racing career with earnings of more than $850,000. He recorded his first stakes win at age 4 in the Grade 3 Native Diver Handicap, and then at age 5 placed in five stakes, including the Grade 1 Hollywood Gold Cup. In his final year on the track at age 6, he won the Grade 2 San Diego Handicap over Paynter and finished second to Game On Dude in the Grade 1 Pacific Classic and Hollywood Gold Cup.

Kettle Corn stood the 2017 breeding season for a fee of $2,500 at Kimpton E. & Lori Williams’ Fair Winds Farm in Waynesville.