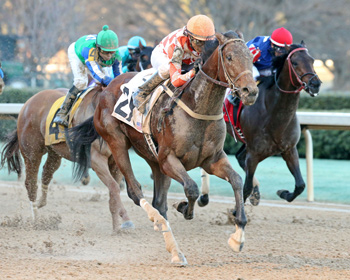 Four Arkansas Derby graduates have secured a spot in the Kentucky Derby – if they choose to run – including Creator, the last-to-first winner of Saturday’s $1 million Grade 1 race at Oaklawn, under Ricardo Santana Jr. and Suddenbreakingnews, the runner-up to Creator who launched his career at Remington Park in Oklahoma City.

Creator, who is trained by Steve Asmussen, earned 100 points for his 1 ¼-length victory over Suddenbreakingnews before an estimated crowd of 65,000 on the final day of the Oaklawn meeting. Coupled with a third-place finish in Oaklawn’s final major prep for the Arkansas Derby, the $900,000 Rebel Stakes (G2) March 19, Creator has amassed 110 points to rank sixth on the Kentucky Derby leaderboard.

The May 7 Kentucky Derby at Churchill Downs has been limited to 20 starters since 1975. If more than 20 enter, starting preference is given to horses with the highest point totals in the 34-race “Road to the Kentucky” series. At least 20 horses have entered the Kentucky Derby every year since 2004.

Suddenbreakingnews (50 points) and Arkansas Derby third-place finisher Whitmore (44) rank Nos. 12 and 16, respectively, and are safely in the field. Cupid, 10th as the 4-5 favorite in the Arkansas Derby, has 50 points to rank No. 13. Cupid earned those 50 points for his Rebel victory.

Dazzling Gem, who finished fourth in the Arkansas Derby, is on the Kentucky Derby bubble, ranking 25th with 30 points.

Creator will be flown to Kentucky Monday, said Elliott Walden, president/CEO and racing manager for WinStar Farm, which owns the gray son of Tapit.

Trainer Donnie K. Von Hemel said Suddenbreakingnews will be vanned Tuesday to Kentucky, adding “you’ll probably see him in the entry box” for the Kentucky Derby.

Suddenbreakingnews, who finished fifth in the Rebel, rallied from well back to grab second under regular rider Luis Quinonez. The gelding was 10th after three-quarters of a mile.

“The only puzzling thing was Louie said he was struggling with the race track a little bit, and really didn’t start moving until they straightened away down the lane,” Von Hemel said. “Around the turn, I was really worried about whether he was going anywhere at all.”

Whitmore, beaten 2 ¾ lengths by Creator, is also headed to the Kentucky Derby, the gelding’s co-owner/trainer, Ron Moquett of Hot Springs, said Sunday morning. Moquett said Whitmore came out of the race fine physically and will be flown Monday to Kentucky. The gelding will spend two days in Lexington (oxygen therapy), Moquett said, before arriving at Churchill Downs.

Moquett said Whitmore rider, Irad Ortiz Jr., thought he might go down after the horse on the outside, Luna de Loco, “came over on him,” about 100 yards out of the gate. The trainer said Whitmore lost position because of a “stumble” and was farther back than expected (11th through a half-mile) “after the race matured enough to where everybody was running full speed.”

“That horse is obviously a good horse,” Moquett said of Creator. “I’m not taking anything away from him. Yesterday, the horse that had the ability also a trip that enabled him to do it. There’s something to be said about our horse being in trouble. I believe we’re not a trouble-prone horse, but three times in a row and you start thinking.”

Whitmore finished second in the Southwest after having to steady and was second in the Rebel when caught five-wide on the second turn. Moquett said he hopes Ortiz Jr., the country’s top jockey this year in purse earnings, will ride Whitmore back in the Kentucky Derby. He also rode Whitmore for the first time in the Rebel.