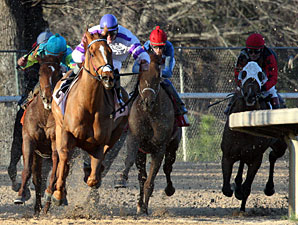 Like a fine wine that gets better with age, Brett Creighton’s Humble Smarty scored a decisive 4 ½-length victory in Tuesday’s $51,000 Clem McSpadden Memorial Route 66 Stakes at Will Rogers Downs in Claremore, Oklahoma. The 9-year-old Arkansas-bred gelding dashed six furlongs over a good track in 1:10.20 with Belen Quinonez aboard for trainer Jerry Donaldson.

Bred by James Danaher out of the Zignew mare Humble Danzig, the son of Mutakddim has now won 18 of 73 career starts with earnings of $536,883. The gelding is enjoying perhaps his best season yet this year as he has three wins and a second in five starts. Humble Smarty began his 2013 campaign with an allowance/optional claiming win at Oaklawn Park in his home state and then captured the $60,000 Nodouble Breeders’ Stakes for Arkansas-breds. The veteran sprinter has earned $113,750 this year.

Texas-bred Solar Charge, a 6-year-old gelding by Authenticate running for owner H and H Ranch and trainer Danny Pish, got up to finish second and pushed his career bankroll to $326,192.