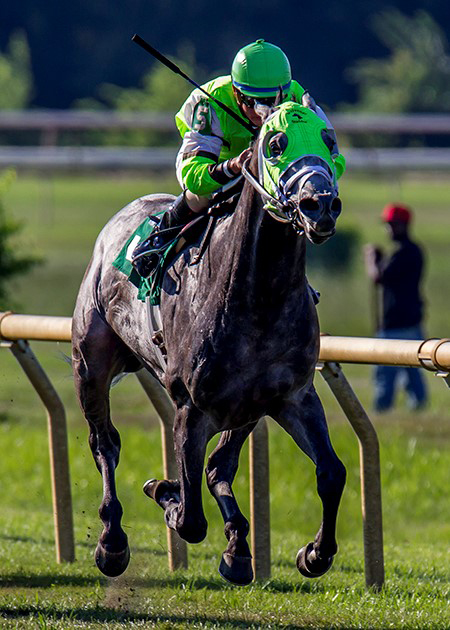 The fields are set for Louisiana Cup Day at Harrah’s Louisiana Downs on Saturday, August 5. First post is 3:15 pm (Central) for card which will feature nine stakes, highlighted by the running of the $60,000 Super Derby Prelude.

The stakes for 3-year-olds will be contested on the Franks Turf Course at the distance of a mile and one-sixteenth this year. The winner will receive a berth to the $200,000 Super Derby on Saturday, September 9; the richest race of the 2017 Louisiana Downs Thoroughbred racing season.

Trainer Allen Landry conditions Magic Vow, the son of Private Vow out of the Broad Brush mare Whitewashed. The bay gelding is owned by Evelyn Benoit of Brittlyn Stable, Inc. This will be the first turf start for the bay gelding, who enters the race with a record of four wins from eight starts and earnings of $199,900.

“He’s bred for the grass and he has shown us he can route,” said Landry.

Mr. Misunderstood with Chris Rosier up, will make his first start since competing in the Grade 3, Illinois Derby on April 22. He was a multiple turf winner last season at Fair Grounds.

Trainer Efren Loza, Jr. sends in St George Stables LLC’s Jilotepec, a lightly raced colt by Into Mischief, who has won two of his three career efforts and will make his first start on the grass.

The Prelude field also includes Fast Talkin Man, a Texas-bred son of Oratory, trained by Danny Pish. He is stakes-placed on turf and will break from the rail under rider Luis Quinonez. Queeten has won two allowance races this meet for trainer Sarah Delany and will make his turf debut under rider Emanuel Nieves. Trainer Charles Hukill will give a leg up to Aubrie Green on Score’s Choice and Louisiana Downs leading trainer Joey Foster will saddle Mizztic Tale, a son of Mizzen Mast. Gerardo Mora will guide the Kentucky-bred from the far outside post.

The Super Derby Prelude is set as the eighth race of the card, with an approximate post time of 6:24 pm.

“I am proud of the race card that racing secretary David Heitzmann and the racing office team put together for Louisiana Cup Day,” said Trent McIntosh, Louisiana Downs assistant general manager. “It’s very difficult to get this many competitive races with full fields especially on all stakes days, but they did just that.”

Scott Brown’s Aceguitar, a son of noted Louisiana champion Star Guitar, will wheel back following his runner-up finish in the $105,000 Texas Thoroughbred Futurity at Lone Star Park on July 22.

“He’s a promising young horse and came out of the stakes at Lone Star in good shape,” said trainer Danny Pish. “We think he deserves a shot.”

$50,000 John Henry
The first turf feature of the card is the $50,000 John Henry with a field of nine going a mile and one-sixteenth over the Franks Turf Course. This is one of the two features transferred from Evangeline Downs for the Louisiana Cup Day card.

Doug Wall’s homebred Ibaka is closing in on the half-million dollar earning mark, with stakes wins at Sam Houston Race Park, Will Rogers Downs and Remington Park. Bret Calhoun trains the 5-year-old son of Uncle Abbie, named for Serge Ibaka, who played for the Oklahoma Thunder from 2009 -2016. Ibaka drew the rail for his Louisiana Downs debut and will be ridden by Eddie Martin, Jr.

“He is a solid horse and has remained sound and healthy,” said Calhoun. “This race fell at a good time and will set him up nicely for his return to Remington Park and the Oklahoma-bred stakes.”

Defending champion Look Into My Eyes, a 5-year-old daughter of City Zip, owned by Kathleen Amaya and Raffaele Centofanti returns. Trained by Loza, she will be ridden by Colby Hernandez, her winning pilot in the $100,000 Louisiana Legends Mademoiselle Stakes at Evangeline Downs on July 8.

Loza is based in south Florida, but has shipped several stakes runners to Texas and Louisiana in the past three years. He is looking forward to returning to Louisiana Downs on August 5.

“Louisiana Downs has a nice turf course and we had success there last summer,” said Loza.

Trainer Ron Faucheux won the $100,000 Louisiana Cup Turf Classic last year with Sunbean, the intrepid turf specialist bred and owned by Brittlyn Stable, Inc. The same noted connections will return to Louisiana Downs with Safari Calamari, a 5-year-old mare by Half Ours.

“She ran second to Believe in Bertie (in the $60,000 Red Camelia Stakes) at Fair Grounds,” he said. “This mare is much better on the turf, but we needed to get a race in her. She ran at Louisiana Downs on July 12 over a sloppy track. She lost by a nose; but she ran well.”

Janae, won the $100,000 Texas Thoroughbred Futurity two weeks ago at Lone Star Park, drew post 12 in the field of 13. Purchased for $16,000 by Susan Moulton, the daughter of Closing Argument has already won $77,000. She is trained by Brandon Jenkins, the son of longtime Texas horseman Bobby Jenkins. She will reunite with jockey Kerwin Clark on Saturday.

“She’s doing really well and my only concern is that this will be her first time going three-quarters (of a mile),” he said. “Susan knew Kerwin (Clark) when she used to gallop at Lone Star Park, so all the credit for her last race goes to him. She drew the ten-hole that day, so we are hoping he can angle her in again.”

Jenkins began the Lone Star meet with three horses and now is up to 12 in his barn.

“It’s been pretty amazing,” he said. “I’m hoping she can run a good race at Louisiana Downs. It means a lot to a ‘small time trainer’ to have a nice filly like Janae.”

Matalona Thoroughbreds LLC’s Feisty Embrace is one of several fillies looking to step up to stakes company. Trainer Al Stall, Jr, will be in Saratoga this weekend, but will watch the race.

“I scratched her out of the Evangeline Stakes because I think this distance suits her,” he said. “She tries hard and drew well for her stakes debut.”

Runner-up Eden Grey’s Kitten, trained by Steve Flint, will return. The 5-year-old son of Kitten’s Joy had previously won two in a row, including the $60,000 Costa Rising at Fair Grounds.

$50,000 Louisiana Cup Sprint
The $50,000 Louisiana Cup Sprint will run as race seven. The six-furlong main track dash drew a field of 14. Trainer H.B. Johnson, who is based at Louisiana Downs, has two entrants in final preparation for this feature. Icy Gentleman, bred and owned by Ironwater Farms Joint Venture, ran fourth in the 2016 edition of this race and has banked over $312,000 in fifteen starts. He won the Louisiana Premier Night Sprint on February 11 and was second to Jockamo’s Song one month ago in the $100,000 Louisiana Legends Sprint at Evangeline Downs. Diego Saenz will ride the 4-year-old Icy Gentleman and Eguard Tejera will pilot All About Interest for owners Timothy Riley and Gregory Hoffman. The 8-year-old, sired by Interest Rate ran second in the 2015 Louisiana Cup Sprint.

Artistic License, a 6-year-old daughter of Heart of the Storm will make her 37th career start for Carl Moore Management, LLC and trainer Bret Calhoun.

“She was a little unlucky at Lone Star Park,” said Calhoun. “She won the River Cities last year on Super Derby day, so we know she likes the Louisiana Downs turf course.”
Louisiana Thoroughbred Breeders Association to Award Scholarships on Saturday

In honor of Louisiana Cup Day, the Louisiana Thoroughbred Breeders Association will award two (2) scholarships, each valued at $1,000, on Saturday afternoon. The drawings will be between the fifth and sixth races. Students must be there to register between 2:15 p.m. and 3:15 p.m. at the designated registration booth.

For more information on requirements for the scholarships, please call 1-800-772-1195 or visit louisianabred.com.