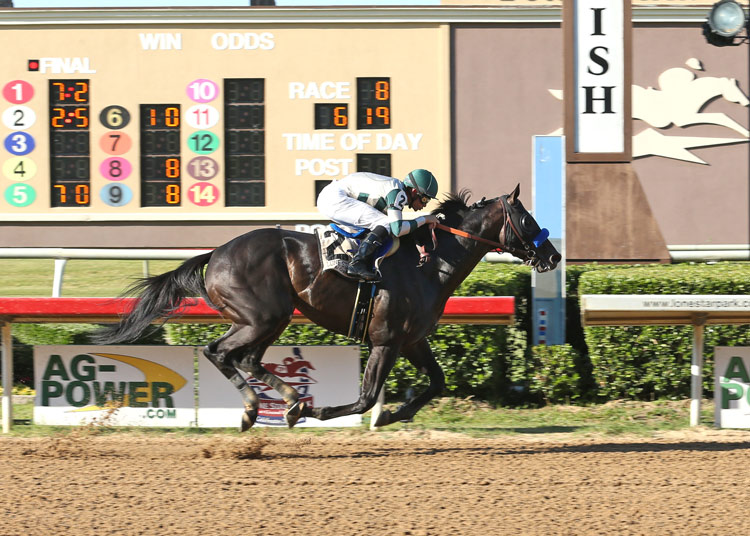 Odds-on favorite Mor Sprit came through with a big effort in Sunday’s $200,000 Steve Sexton Mile Stakes (G3) at Lone Star Park as he rolled to a 5 ¾-length victory with jockey Mike Smith up for trainer Bob Baffert. Texas Chrome, the 2016 Texas Horse of the Year, finished second with Maxxam Gold Cup winner Iron Fist in third and former Oklahoma Horse of the Year Shotgun Kowboy in fourth.

As released last month, the Steve Sexton Mile, previously known as the Texas Mile, was re-named to honor of the track’s former executive vice president and general manager who died in December at age 57 after battling brain cancer.

On an unfinished bucket list left by Sexton was his wish to put a student through college who otherwise would not have the opportunity. To fulfill this wish friends and family of Steve created a GoFundMe account which has received more than $20,000 so far. The family is in the process of making the Steven P. Sexton Foundation a 501(c)(3) charitable foundation. To make a donation you can visit the GoFundMe page at https://www.gofundme.com/343nturm.

The Sexton Family was in attendance Sunday and presented the trophy to the winner.

“This is the best field this race has drawn in more than a decade,” said Lone Star Park President and General Manager, Scott Wells. “I think a large part of that is attributable to the legend of Steve Sexton and his great contributions to the racing industry. It has shaped up to be one of the most stellar and competitive fields for any main track mile race in North America.”

A 4-year-old ridgling by Eskendereya, the Pennsylvania-bred Mor Spirit covered the mile in 1:36.86 to boost his earnings to $1,008,400. Owned by Michael Lund Peterson, Mor Sprit won the 2015 Los Alamitos Futurity (G1) and finished second in the 2016 Santa Anita Derby (G1) before crossing the wire 10th in the Kentucky Derby (G1). He shipped to Lone Star after winning the Essex Handicap at Oaklawn.