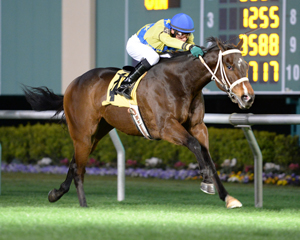 Saturday’s feature at Sam Houston Race Park was the $50,000 Bucharest Turf Sprint for accredited Texas-breds at five-furlongs over the Connally Turf Course. It was an impressive performance by Meme Jo, who came flying late under rider Iram Diego and won by 1 ¾ lengths. Owned by George A. Bryant and trained by his father, George R. Bryant, the 5-year-old son of Lane’s End Texas stallion Too Much Bling earned the first stakes win in his 25 career start.

Caroline Dodwell’s Aces N Jacks, a gelding by Jet Phone with Gerardo Mora in the irons, set a blazing first quarter-mile of :21.77. Meme Jo, who has two previous turf wins, tracked the pacesetter and had plenty left for the finish. He rallied for the victory in a final time of :57.67 over the firm turf course.

“We laid right behind Aces N Jacks and hoped we had something left for the finish,” said the winning trainer. “Our horse ran a monster race. He’s a hard-knocker; runs good on turf or dirt. He just gives it all he has every time.”

“This was incredible,” said his son. “I knew we had a shot in the race as it drew six and there wasn’t a ton of speed except for Aces N Jacks. Iram rode a great race.”

Meme Jo defeated five rivals, scoring the upset over multiple stakes winner Solar Charge, who was sent off at odds of 9-10. The 8-year-old son of Authenticate is trained by Ellen Williams and has won 15 career races, including the 2012 Spirit of Texas and 2013 Bucharest Stakes at Sam Houston Race Park. He placed second in last year’s edition of the turf feature and filled that spot again this year.

“He was running at the end,” said jockey Lindey Wade. “He’s just an older horse and got a little far back, but finished well.”

Meme Jo, sent off at odds of 6-1, returned $14.40 for the win and picked up a check for $30,000 this evening. Bred by Jeanne Bruce, the Texas-bred’s career record now stands at 8 wins from 25 starts and $149,089 in earnings. Cook Racing’s Queenland, the only mare in the field, closed for third under rider David Cabrera. Mula Run was next, followed by Proper’N Storme and Aces N Jacks.

The Bucharest Stakes is named for the late Thoroughbred sprinter Bucharest, owned by Israel Flores and trained by Amos Laborde, who set track records at Sam Houston Race Park for the distance of five and one-half, six and seven furlongs. Laborde conditioned Bucharest and took meticulous care of the Kentucky-bred gelding, who won seven of his 15 career starts, and was named Sam Houston Race Park Horse of the Meet in 1996. His lightning fast six furlong time of 1:08.88 on May 11, 1994, will no doubt stand the test of time.