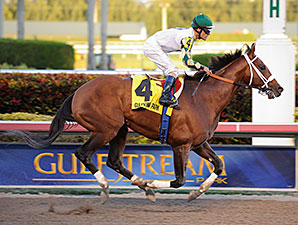 Reeves Thoroughbred Racing of Suwanee, Georgia, is excited to announce that on Thursday, May 1, Georgia Governor Nathan Deal will proclaim Mucho Macho Man Day in the state of Georgia. There will be a small press conference in Georgia’s capital of Atlanta on May 1 at 9:30 a.m. where he will make the proclamation.

Georgia has a long history of producing some of the greatest champions in sports, and 2013 Breeders’ Cup Classic (G1) winner Mucho Macho Man, owned by Georgia’s Dean Patti and Reeves’, is the first racehorse in Georgia to receive this honor. Mucho Macho Man’s story epitomizes the hard work, dedication and teamwork required to become a champion in any professional sport.

In November 2013, facing one of the toughest Breeders’ Cup Classic fields ever assembled, Mucho Macho Man won the $5-million event, stamping his name forever in Breeders’ Cup history by holding off a furious charge from Will Take Charge and Declaration of War in a photo finish for the ages. His trainer, Kathy Ritvo, became the first woman trainer to win one of the most prestigious races in the world.

Mucho Macho Man will retire at Frank Stronach’s Adena Springs Farm, home to the four Breeders’ Cup Classic winners, at the conclusion of his racing career.