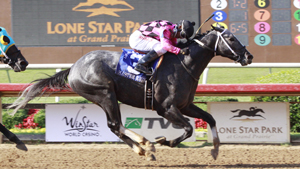 Picking up his second graded stakes victory of the meet, Master Rick rolled to a one-length victory in the $300,000 Lone Star Park Handicap (G3) on Memorial Day. Owned by Richard L. Davis of Dallas and trained by Steve Asmussen, Master Rick stalked the pace in the 1 1/16-mile event and then seized control in the stretch before stopping the timer at 1:42.09 under Ricardo Santana Jr. The 4-year-old colt paid $4.20 to win as the favorite.

Zayat Stables LLC’s Prayer for Relief, a three-time graded stakes-winning millionaire, finished well clear in second to give Asmussen a sweep of the exacta. The 5-year-old also ran second to Master Rick in the Texas Mile.

H and H Ranch’s Formaggio, trained by Danny Pish, finished third, 14 ½ lengths behind Prayer for Relief. J. Kirk and Judy Robison’s Isn’t He Clever finished fourth in the four-horse field that was depleted by the scratch of Battle Hardened.