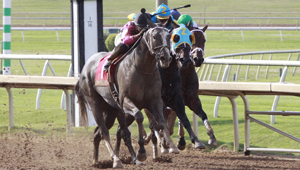 Master Rick, running for Dallasite Richard Davis, used a four-wide move on the far turn and rallied to win the $200,000 Texas Mile Stakes (G3) on April 27 at Lone Star Park and record his first career graded stakes victory. Ridden by Ricardo Santana Jr. and trained by Steve Asmussen, the son of Master Command scored by 1 ¼ lengths in an evenly-matched field of six. The Florida-bred covered the course in 1:36.01 as the 5-2 second choice in a race with five horses sent off at odds between 5-2 and 4-1.

Master Rick, who was bred by English Ranch Farm, needed five tries before he broke his maiden at Oaklawn Park as a 3-year-old last March, but he followed that up with a victory in the $100,000 Northern Spur Stakes at the Arkansas track. He then took on some of the toughest horses in the country and hit the board in the Super Derby (G3) and Zia Park Derby. As a 4-year-old this season, he finished fourth in the Fifth Season Stakes and Essex Handicap at Oaklawn before winning an allowance/optional claiming event there. All told, Master Rick has compiled a record of 16-4-1-2 with earnings of $351,363.

“Absolutely the best!” said Davis after the race. “Obviously a mile is his distance, and that’s where he’s the strongest and we’re gonna keep him there.”

Favored Prayer for Relief, a millionaire who won three graded stakes as a 3-year-old and hit the board in four graded events as a 4-year-old last year in California, put in a good effort to take second and gave Asmussen a sweep of the exacta.

The 6-year-old gelding Good Lord, a veteran of 48 races who came in from Tampa Bay Downs, set the early pace and held on to finish third.