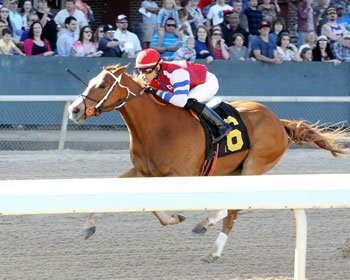 Oaklawn presented a trio of Arkansas-bred stakes over the weekend with one familiar face and two new stakes winners.

Maize Road relaxed nicely for jockey Alex Canchari and sat just off the pace set by Handsome Roy, who led through fractions of :21 4/5 and :45 2/5 for the first half mile. The winner came four wide around the turn for home to assume the lead and continued to draw away from his six other rivals, completing the six furlongs in 1:11 over a fast track.

Carson’s Suspect had to settle for second after the objection lodged by jockey Ricardo Santana Jr. was not allowed. Mr Ark closed well from seventh to get third.

Trainer Randy Morse was following in the footsteps of his father W.R. “Charlie” Morse, who won this race in 1982 with Jef Fix.

“This one didn’t pay quite as good as that horse did,” said Morse. “I think he paid like $96 that day, so that was a pretty good day. But this is, too.”

Maize Road, a 3-year-old Afleet Alex gelding bred in Arkansas by McDowell Farm, improved his record to two wins from five starts and has now earned $119,800 for his connections. This was his first stakes win.

Breaking from post four under jockey Walter De La Cruz, the winner shot out of the gate and took control early, setting early fractions of :22 2/5 and :46 3/5 for the first half mile. Sadie Be Mine, who had been tracking in second, came within a head of the winner, but began to fade at the top of the stretch as Seeking Angels drew off to win by 1 ½ lengths over a fast closing Avisionofchocolates. Aunt Gayle came from sixth to get third. The winning time was 1:11 for six furlongs over a fast track.

“That wasn’t actually the game plan (being on the lead),” said winning trainer Bill Martin. “We knew there were a couple of horses that had a lot of speed, that we could lay off of them a little bit. But, it just worked the way it worked. She finished the way we wanted her to finish.”

Seeking Angels, a 3-year-old Arkansas-bred filly by Bob and John, has now won two of three career starts and has earned $115,400. She was bred by Dr. Dan White and is owned by White and Martin Brothers Racing Inc.

The heavy 3-5 favorite Weast Hill answered a big question Friday when he improved his Oaklawn record to a perfect five for five with his victory in the $100,000 Arkansas Breeders’ Stakes, his first start beyond six furlongs. He returned $3.20, $3.20 and $3 to all backers who were confident in his ability to handle two turns.

Weast Hill assumed his usual position at the front of the field and led through an opening quarter mile in :23. He allowed Indygo Bo to take over for a half mile in :47 2/5, but quickly took command rounding the turn and was never seriously challenged as he drew off to win impressively by four lengths. He completed the 1 1/16 miles in 1:45 over a fast track.

“He’s a very, very, very good horse,” said winning jockey Joe Rocco Jr. “I didn’t know how he would handle going long for the first time, but we were able to settle a little bit. I thought that was about as fast as we could go being upfront without going too fast. He’s a nice horse and really showed it today.”

Mallard’s Bro came from eighth-place early in the race to be second, a half-length in front of third-place finisher Meanbone. Trace Creek, last year’s winner, was fourth.

“Joe did a good job,” said winning trainer Brad Cox, who conditions the 4-year-old Rockport Harbor gelding for breeder Starsky Weast. “We knew he would break sharp and put himself on the pace. Joe did the best he could idling him down. He showed up and ran a big race.”

Weast Hill has now won a total of six races from eight starts and has earned $279,710. Cox indicated after the race that he will now try turf racing in his next start, which will likely be at Churchill Downs.