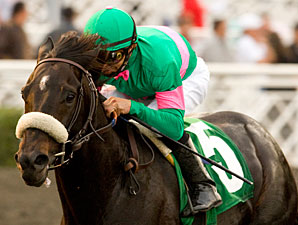 Neko Bay, a son of Giant’s Causeway who stands at Elite Thoroughbreds in Folsom, Louisiana, was represented by his first two winners on August 28 as Magic Bay broke his maiden at Arlington Park and Netcents did the same at Louisiana Downs.

Magic Bay scored his maiden win by seven lengths for owner Larry Bingham and trainer Scott Mullins. The gelding was bred in Kentucky by Meritage Ventures Inc. Netcents, who was bred in Kentucky by Texas-based Eureka Thoroughbred Farm, defeated special weight foes by two lengths at Louisiana Downs. A $20,000 purchase at the Fasig-Tipton Texas 2-Year-Olds in Training Sale, the colt runs for Terrell Jarret Jr. and trainer Jorge Lara.

Neko Bay hit the board in 12 of 14 career starts with a victory in the Grade 2 San Pasqual Handicap and a second-place effort in the Grade 1 Santa Anita Handicap. He stood the 2014 breeding season for a $3,000 fee.