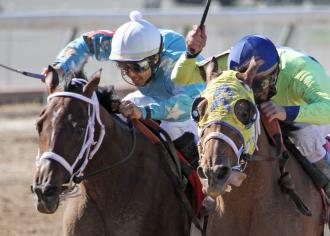 For the first time ever, Sittin At The Bar, a 2011 graduate of the Breeders Sales Company of Louisiana Inc., a wholly owned subsidiary of the Louisiana Thoroughbred Breeders Association, won the $100,000 Bayou State Bonus in a dead heat finish with Mark Guidry in the irons in the Elge Rasberry Memorial Stakes today at Harrah’s Louisiana Downs.

“It takes a special horse to win this,” said trainer Brett A. Brinkman. “She’s an exceptional filly and the design of this Bayou Stake Bonus is a lot more difficult to win than you think it is.”

“She came out of the race in very good shape,” said Brinkman. “It is really amazing because she was the only horse is two separate divisions (colts/gelding and fillies) to win this thing ever. I don’t think people realize how hard this Bonus is to win. You have two horses closely favored to win. There was any number of ways you could get beat.”

In the 2012 $100,000 Louisiana Champions Day Lassie at Fair Grounds in New Orleans, restricted to Louisiana-bred 2-year-old fillies, Dale Ladner’s Sittin at the Bar, with Mark Guidry up, rallied outside the leaders in the stretch run and drew off for a popular eight-length score. Sittin At the Bar returned $3.40 straight, toured the six furlongs in 1:11.10 with her second win from four starts.

On March 30, 2013, Sittin at the Bar won the $75,000 Crescent City Oaks at Fair Grounds. She won the Crescent City Oaks for trainer Brett A. Brinkman with Shaun Bridgmohan in the irons. The race was a mile and 70 yards and she won by three-quarters of a length.

Spendthrift Farm LLC bred the 2010 bay filly by Into Mischief out of Fast Laner by Mutakddim. Lander purchased the filly at the Breeders Sales Company of Louisiana in 2011.

The bonus paid will be added to the earnings of the winning horse and paid to the owner of the horse after the official completion of the final race.