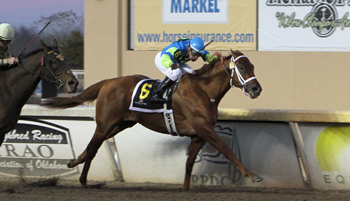 Louies Flower would not give in throughout a hard-fought stretch battle with Noble Cornerstone, holding on to win the $250,000 Springboard Mile by a neck. The victory was the third in a row this season for Louies Flower as he won the top 2-year-old stakes event at Remington Park.

Owned by TTA and TRAO member Wesley Melcher of Plano, Texas, and trained by Bret Calhoun, Louies Flower sat just behind the early pace set by Alpha and Omega, before moving in tandem with Dunkin Bend as the field made their way into the final turn. Alpha And Omega gave up the lead with just under three furlongs left, leaving Louies Flower to battle with Boji Moon at the top of the stretch.

Under jockey Luis Quinonez, Louies Flower took the lead with a furlong to go and opened up a clear advantage. Noble Cornerstone was full of run with Hall of Fame Jockey Kent Desormeaux up, gaining with every stride. However, their effort fell short as Louies Flower dug in over the final 100 yards to repel the challenge and score by a neck.

“It seemed like it took a long time to get to the wire but we got their first,” noted Quinonez. “He’s a game horse, he knows how to win.”

Louies Flower broke his maiden in early October at Remington Park going 5-1/2 furlongs. He was given an opportunity to go one mile in his next start on Oct. 30 and pulled clear in that race to win by 5-1/4 lengths.

“We had an idea that two turns was right down his alley, it sure paid off today,” said Jay Severs, assistant to trainer Bret Calhoun. “He was very impressive going a mile (in his last start), that’s the race that keyed us to go here.”

Alpha and Omega set early fractions of :23.58 seconds for the quarter-mile and :47.18 second for a half-mile. Louies Flower and Dunkin Bend hit the six-furlong mark in 1:12.19 before the former took over into the stretch. Louies Flower crossed the finish in 1:38.83 over a fast track.

Away at 23-1 odds in the wagering, Louies Flower paid $48 to win, $21.60 to place and $11.60 to show. Noble Cornerstone paid $6.80 to place and $5.40 to show. Smack Smack, winner of the Clever Trevor Stakes here in November, rallied for a distant third, almost six lengths behind the winner, paying $3.20 to show. Boji Moon was the 3-1 wagering favorite, finishing a beaten fifth after briefly challenging at the top of the stretch.

Bred in Florida by Shadybrook Farm & Castletop Stable, Louies Flower is a colt by Flower Alley from the Johannesburg mare Tembisa. The Springboard is his third career victory, all coming at Remington Park, from five starts overall. He picked up $150,000 for the effort to move his overall money to $190,083.

The Springboard win was the first for Melcher and Quinonez. Louies Flower provided the second win for Calhoun who won the race in 2010 with Grant Jack.

Many from the Springboard will now move on into their 3-year-old year with aspirations of moving on into the Triple Crown events in May and June. The 2012 Springboard Mile runner-up, Will Take Charge, competed in every Triple Crown race before winning the Travers Stakes at Saratoga and the Pennsylvania Derby at Parx in Philadelphia. He then finished second by a nose in the Breeders’ Cup Classic at Santa Anita before capping his 3-year-old campaign with a triumph in the Clark Handicap at Churchill Downs.

Trapeze Stakes
The Springboard Mile undercard featured a trio of $50,000 stakes events, including the first Trapeze Stakes for 2-year-old fillies at a mile. The inaugural running of the Trapeze was won by La Mejor Fiesta. Ridden by Hall of Fame Jockey Kent Desormeaux and trained by Wesley Ward, La Mejor Fiesta paid $7.20 to win, $3.80 to place and $2.80 to show. Really And Truly yielded the lead and finished second, paying $4 and $2.60. Xray Vision chased throughout and paid $2.80 to show.

La Mejor Fiesta is a filly by Harlan’s Holiday from the Thunder Gulch mare Better Now, bred in Kentucky by Forging Oaks. She is owned by Ice Wine Stable of Briarcliff Manor, N.Y. and trained by Wesley Ward. She has won two of five career races. The Trapeze was her Remington Park debut, earning her $30,000 to push her overall total to $73,815.

The son of Mighty Acres stallion Kipling out of the Royal Academy mare Royal And Ancient was bred by Harmony Stables. He is owned by the meet’s leading owner Danny Caldwell of Poteau, Okla. and trained by Federico Villafranco.

Big Sugarush won for the sixth time in 13 career starts while posting his second Remington Park win. The $30,000 winner’s share now gives him $131,811 for his career.

Useeit Stakes
More Than Even set the tempo then stepped clear to convincingly win the $50,000 Useeit Stakes by 6-1/4 lengths in the one-mile event for 3-year-old Oklahoma-bred fillies.

The winner is a daughter of Stephen Got Even from the Dehere mare Sallybrooke, bred in Oklahoma by the owners. The win was the sixth from 17 career attempts for More Than Even and her fourth overall at Remington Park. She picked up $30,000 to run her career total to $174,954.

Springboard Mile Sunday was originally scheduled to be the final day of the 2013 Remington Park Thoroughbred Season but due to the cancelation of three race dates caused by the winter storm last week, the season has been extended two afternoons. Racing will continue on Monday and Tuesday, Dec. 16 & 17 at Remington Park with the first event daily at 1:30pm.