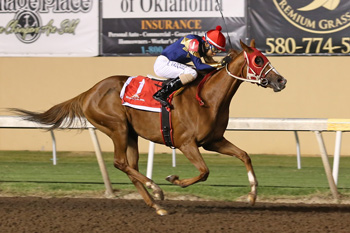 Jockey Ramon Vazquez rode five winners on Friday night at Remington Park, enjoying a stellar night that launched him to the top of the jockey standings. One of the handful of victories came aboard Lively Vision, who won the $50,000 Te Ata Stakes by two lengths.

The Te Ata, for Oklahoma-bred 3-year-old fillies, was contested at seven furlongs. Lively Vision was paired in the wagering with two of her stable mates, Mama’s Mad Money and For All You Know, in a rare three-horse entry owned by Big Sugar Racing of Bentonville, Ark. All are trained by Tim Martin.

Lively Vision stalked the early lead of Devious Rumor until the field came off the lone turn of the Te Ata and she made her move for the front. Lively Vision pulled clear by over five lengths in the stretch, then held off late chargers. Lively Vision handled the distance in 1:24.36 over the fast main track.

Cheyenne Blues rallied for second with Okey Smokey gaining third. However, Okey Smokey was taken down from third and placed fifth after she caused interference to Cass Lake Kitty coming off the turn. Zeta Zody was moved into third position with Cass Lake Kitty awarded fourth.

Lively Vision’s Te Ata triumph was her third career win, all coming at Remington Park. The daughter of Pollard’s Vision from the Louis Quatorze mare Lively was bred by John James Revocable Trust. She earned $30,000 for the effort to move her total bankroll to $103,301.

The Te Ata is named in honor of the master Chickasaw entertainer and story-teller that performed for heads of state on multiple continents for over 70 years and lived to be 100 before passing in 1995.

Tishomingo Stakes
Alpha and Omega took the lead shortly after the start of the companion race to the Te Ata for Oklahoma-bred 3-year-old colts and geldings. The Tishomingo, also conducted at seven furlongs, saw Alpha and Omega pull clear to win by 2-1/2 lengths at the finish.

Owned by Robert Zoellner of Tulsa, Okla. and trained by Donnie Von Hemel, Alpha And Omega was ridden by Luis Quinonez. The gelding set splits of :22.89 seconds for a quarter-mile; :45.98 for the half-mile and 1:10.31 for three-quarters of a mile, saving enough for the stretch run. He crossed the finish line in 1:23.71.

Alpha And Omega won for the third time from eight career starts with all of the victories at Remington Park. A son of Omega Code from the Holy Bull mare Holy Belle, he was bred by Zoellner and made $30,000 to boost his total earnings to $120,654.

The Tishomingo is named in honor for the famed Chickasaw warrior and chief who was instrumental in leading the nation to prominence. The original capital city for the nation in Oklahoma was named in his honor.