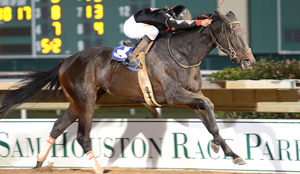 The final stakes of the 2013 Sam Houston Race Park Thoroughbred meet took place tonight with a solid group of 3-year-old fillies competing at the distance of one mile in the $50,000 Auto Nation Spring Stakes.

Trainer Jack Bruner felt that Legal Mind deserved a chance to step up to stakes company. The dark bay daughter of Bellamy Road is owned by Tom Durant and broke her maiden on October 26 at Retama Park. She was impressive as she came off the pace to score by two lengths in a $21,000 allowance on February 9.

Sam Houston Race Park’s leading rider Gerardo Mora kept her in a comfortable tracking position as Livin Peace took the lead, completing the first quarter mile in :23.91 and the half-mile in :47.55. The rail opened up and Mora guided his filly to a 2 ½-length victory. She covered the mile, over a fast main track, in a final time of 1:39.76.

“She’s been training really well and my crew has been touting her strongly,” said Bruner. “Gerry (Gerardo Mora) gave her a great ride”

Satin Gold, who was making her 2013 debut off a third-place finish in the $75,000 La Senorita at Retama Park, rallied for second under jockey Alfredo Contreras.

“She had trouble out of the gates, but settled and made a good run at the end,” said Contreras.

Legal Mind, sent off at odds of 8-1, returned $18.60 to her backers. Bilrrubina (MEX) was sent off as the post-time favorite and ran third, followed by Explosive Argument, Hopelands, Livin Peace, Unrivaled Honor and Portales.

Bruner indicated that the Illinois-bred filly will head to Chicago this summer. It has been a successful showing for the Bruner and Durant barn; they have won 16 of their 47 starts. Bruner reflected on the past two months at Sam Houston Race Park.

“Everybody has been super to us at Sam Houston,” said Bruner. “I cannot say enough good things about the track surface and the racing office. I am really glad we came and wish some of the other tracks were more like Houston.”