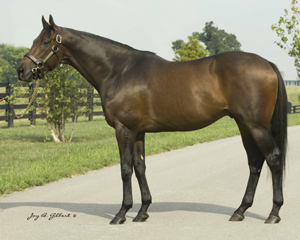 Don’t Get Mad, one of Oklahoma’s leading sires since moving to Dr. Robert Zoellner’s Rockin’ Z Ranch in Beggs in 2011, passed away earlier this week after an accident in the breeding shed.

The son of Stephen Got Even earned $793,835 in 13 career starts with victories in the Indiana Derby (G2), Northern Dancer Breeders’ Cup Stakes (G3) and Derby Trial. He also finished fourth in both the Kentucky Derby (G1) and Travers Stakes (G1).

As a stallion, Don’t Get Mad has three crops to race with progeny earnings of $2.75 million. His leading earner is three-time stakes winner Populist Politics, whose bankroll stands at $491,416. The Louisiana-bred, who was named that state’s champion 3-year-old colt, finished third in the 2011 Super Derby (G2).