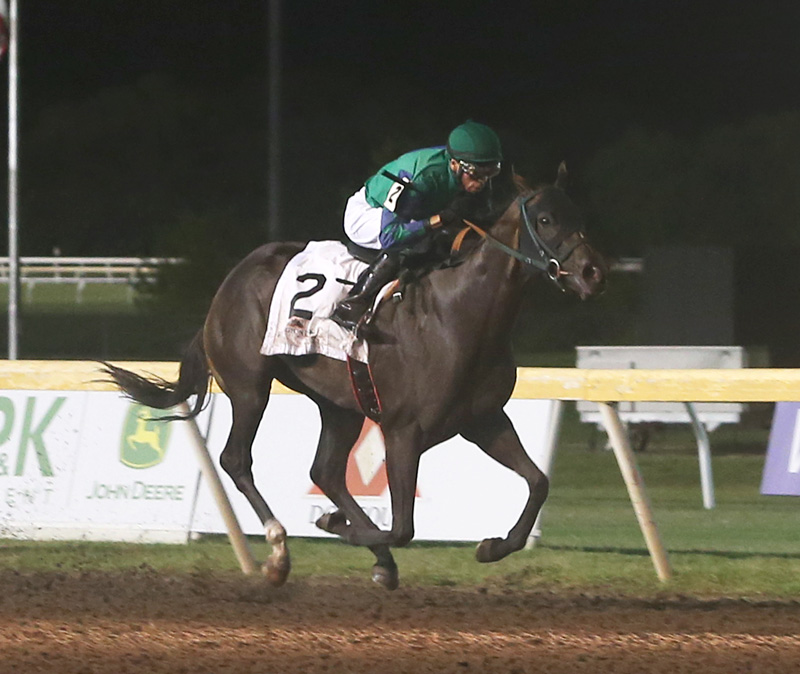 Owner Lori Bravo of Sulphur, Okla., thought she was in heaven when she ran Burst of Life back in 2010-2012, winning six races in a row at Remington Park. Then Burst of Life had a baby in 2016.

Now Bravo is having flashbacks as Lady Orchid, the 3-year-old daughter of Burst of Life, is picking up where her mother left off, winning the $47,800 Oklahoma Stallion Stakes on Friday night at Remington Park. It was the third win in a row for Lady Orchid to start her career, and her first stakes win. Her two other wins came at Will Rogers Downs in Claremore earlier this year.

“Yes, she sure does remind me of her mother,” Bravo said in the winner’s circle. “She kind of has the same style and is a very good-minded filly.”

The only thing that Bravo was worried about was that this daughter of Oratory, out of the Soto mare Burst of Life, had not raced in more than five months.

“I was concerned because after she won her first two races, we took her home and turned her out for about 30 days,” Bravo said. “Then we started getting her ready for this.”

It was no easy task for Lady Orchid either. She was facing multiple stakes winner and heavy wagering favorite She’s Shiney who left the gate at 1-5 odds. She’s Shiney took the $100,000 Classy Lassie Stakes last year at Remington Park by almost 10 lengths. Jockey Iram Diego was confident about his chances with Lady Orchid despite not ever riding her previously.

“They just told me to make sure and win the race,” he said. And he did just that.

“She broke so good and I saw those two horses (front-runners), they were kind of in a hurry, so I just stayed behind them and moved whenever it was time. She did the rest.”

Lady Orchid, trained by Lori’s husband, Francisco Bravo, earned $30,000 for the victory and now is three-for-three lifetime and has a bankroll of $58,154. She’s Shiney, the prohibitive favorite, held on for second, 3-3/4 lengths back and she was 8-1/4 lengths ahead of third-place finisher Game to Play.

Lady Orchid’s mama, Burst of Life, wound up her career winning 9-of-14 for $140,355 and took the $50,000 Flashy Lady Stakes in the final race of her career. It appears that her baby daughter is on her way to a similar life.

In the male division of the Oklahoma Stallion Stakes, D Toz became a multiple stakes winner at Remington Park, following up his Don McNeill Stakes win as a 2-year-old last year here. Jockey Lane Luzzi rode him perfectly for the seven furlongs, hugging the early leader in second and then pouncing in the stretch to blow this field away by eight lengths as the even-money favorite.

D Toz, a 3-year-old gelded son of Chitoz, out of the Strategic Mission mare Dyna Okie, covered the distance in 1:22.67 into the teeth of fractions of 22.95 for a quarter-mile, 45.86 for the half-mile and 1:09.97 for three-quarters of a mile. Criminal was in second, a neck in front of Eurowest in third.

“His trip in his first race of the meet wasn’t the cleanest,” said Luzzi. “And he needed that race anyway. He was a lot more ready tonight and you could tell in the post parade.”

“I think he’s better now than when he won the Don McNeill last year,” said Luzzi.