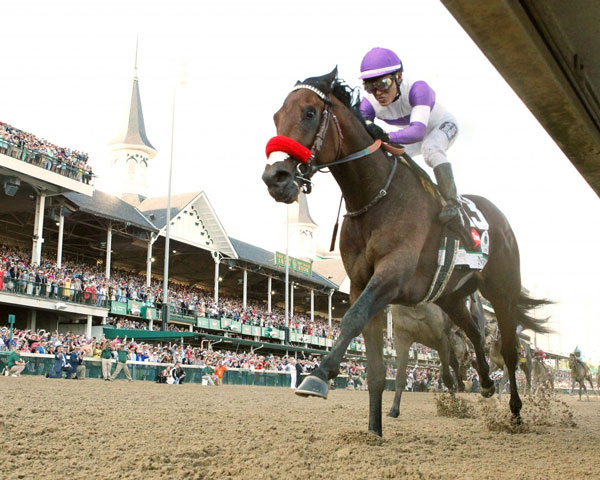 Trainer Doug O’Neill was at Barn 41 at Churchill Downs shortly after 5 a.m. to give a check on his Kentucky Derby winner Nyquist Sunday and the readout was a good one.

“He’s doing great,” O’Neill said. “He had his head out over the webbing, looking bright eyed. He ate it all up last night. Couldn’t be doing better. He’s just such a special horse.”

O’Neill had the horse jogged down the shedrow for a just-in-case look, but that turned out fine, too. By 6 o’clock the Uncle Mo colt had been walked, bathed and put back into his stall.

The trainer was joined his brother Dennis and Tom Knust, the jockey agent for winning rider Mario Gutierrez. Added to the group was Churchill Downs starter Scott Jordan, who dropped by the barn to offer congratulations.

Jordan relayed that the NBC crew broadcasting the race initially had told him they were allotting five minutes of air time for him to get all 20 runners into the gate. He had told them that he thought two minutes would be plenty enough. The NBC guys adjusted to three minutes.

“We started loading and it was going pretty good,” Jordan said. “The NBC guys said I had to slow it down. I told them ‘Sorry, fellas, you’re on my time now.’ We got ’em all in in a minute and 38.”

O’Neill said that Nyquist would be headed to Maryland Monday for the next step on the Triple Crown trail, the Preakness Stakes (GI) on May 21.

“He’ll be part of six horses we send up there, including the filly,” he said. The filly would be Land Over Sea, the 3-year-old who was a bang-up second in Friday’s Kentucky Oaks (GI). Both she and Nyquist are owned by Paul Reddam.

O’Neill added that several of his Derby “crew,” among them chief assistant trainer Leandro Mora and exercise rider Jonny Garcia, were heading back Sunday to his main stable at Santa Anita. He was off to the airport, too, to grab a California flight. He indicated he’d rejoin Nyquist in Maryland Wednesday or Thursday of the coming week.

EXAGGERATOR (second) – Exaggerator, the Kentucky Derby runner-up who used a powerful late kick to come from far back in the field to be beaten just over a length by Nyquist, was doing well at his Barn 25 stall Sunday morning.

Groom Vic Bargac had the Curlin colt out for a walk of the barn area early and reported that his charge was in fine shape following his big effort.

“He’s good,” he said. “He ate it all last night and he liked his breakfast today, too. He’s doing very well.”

Trainer Keith Desormeaux designates Sundays as a day of rest at his barn and, other than the necessary tasks to care for the well-being of the animals, it was quiet along his shedrow.

Following his Derby 142 effort, Desormeaux indicated he’d look forward to a rematch with Nyquist. That appears likely to happen on Saturday, May 21 at Pimlico in Maryland in the 141st edition of the Preakness Stakes.

Gun Runner held a narrow lead entering the stretch, but was overpowered by Nyquist.

“I’m very proud of him,” Asmussen said of Gun Runner. “I thought he gave a great effort. An excellent running of the Derby, for sure.”

The late-running Creator encountered traffic trouble as he was approaching the stretch and jockey Richardo Santana Jr. had to check him.

“I thought Creator lost all chance at the quarter pole. Those horses came together real hard,” Asmussen said.

Plans for both horses are on hold. “Both horse are stabled here now,” Asmussen said. “We’ll give them a couple of days. They’ll go back to the track on Wednesday, and I’ll speak with the owners and see what should happen next.

“I’m very comfortable with who both horses are. I think they should both have a very big year.”

The Daily Racing Form reported that trainer Kiaran McLaughlin would skip the remainder of the Triple Crown with the son of Tapit and focus on the Travers Stakes (GI) at Saratoga.

McLaughlin said Mohaymen had too much ground to make up in the stretch after having trouble handling the racetrack during the early stages of the Derby.

The Mineshaft gelding was one of several horses bothered at the start when another horse came over on them, but was able to find smoother sailing through the stretch.

“We had some bad luck at the start,” Von Hemel said. “Overall, he showed up, he performed. I’m extremely proud of him.”

Von Hemel said that all two-turn races for 3-year-olds were on the table, including the Preakness Stakes (May 21) and Belmont Stakes (June 11), but no decision would be made for at least a week.