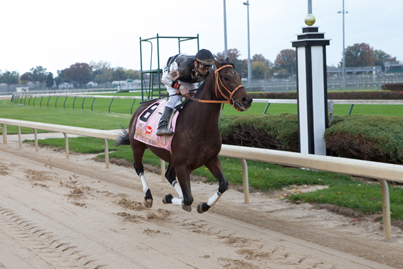 On Monday evening at Remington Park, fans will have the opportunity to meet Mine That Bird, the 2009 Kentucky Derby winner, as he visits on a promotional tour for the movie “50 to 1.”

His longshot story inspired the movie and title, denoting his odds when he came out of the slop and mist to win the historic “Run for the Roses” under Hall of Fame jockey Calvin Borel.

Remington Park will welcome Mine That Bird for a special public appearance in the Paddock Gardens from 6:30 to 8pm (central). The event is open to the public and photo opportunities with Mine That Bird will be available.

Mine That Bird’s unlikely triumph in the Kentucky Derby inspired the film “50 to 1,” released in March 2014. The film tells the story of a misfit group of New Mexico cowboys who find themselves on the journey of a lifetime when their gelding qualifies for entry into the Kentucky Derby. The group face a series of mishaps on their way to Churchill Downs, becoming the ultimate underdogs in a showdown with the world’s racing elite.

Fans interested in seeing Mine That Bird on Monday are encouraged to enter through the Racing Entrance at Remington Park.

The 140th Kentucky Derby will be simulcast from Churchill Downs on Saturday, May 3.