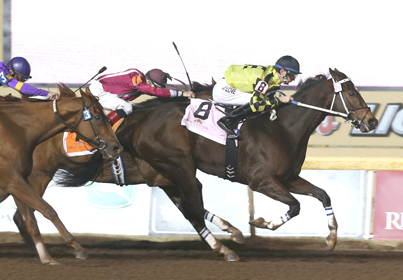 A very consistent runner with in-the-money finishes the norm throughout his career, Johnny Whip had never managed to score a stakes win at Remington Park. Friday night, he managed to shed that tag in winning the $50,000 Silver Goblin Stakes for Oklahoma-breds at 6-1/2 furlongs.

Breaking from the outside post in the field of seven, Johnny Whip was placed in contention by jockey Jareth Loveberry from the outset. The 5-year-old gelding sat a couple lengths off the pace-setting Chifforobe who moved the opening quarter-mile in :22.31 seconds and the half-mile in :45.09 seconds.

“The plan was just to sit off the lead a little bit and let the speed take care of itself,” Loveberry noted. “I let him run when he told me to and he just dragged me to the lead. I saw Okie Ride and tried to get in front of him. I got the little jump in front of (Okie Ride) at the quarter pole and that helped him a lot, gave him a big heart and he kicked on from there.”

In the stretch, Johnny Whip fended off every advance of the resilient 7-year-old Okie Ride to win by three-quarters of a length in 1:15.94 over the fast track.

Okie Ride and Z Rockstar shared the win in the 2013 Silver Goblin Stakes, winning in a dead-heat.

The win was the 11th from 37 career starts for Johnny Whip, a gelded son of Stephen Got Even from the Seeking The Gold mare Paradisa. He made $30,000 for the score to run his overall earnings to $303,809.