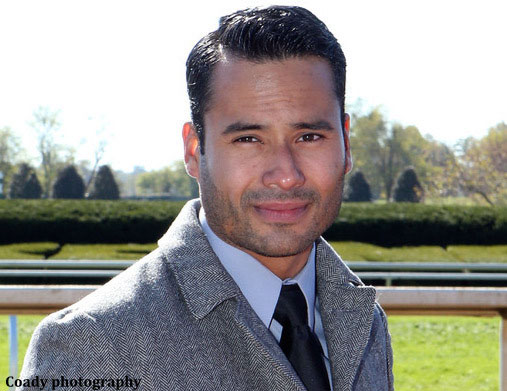 John Ortiz already has plenty to talk about in his training career, but he doesn’t mind discussing his private life, either. Both blossomed in 2016.

Married last summer, Ortiz, a former assistant to Kellyn Gorder, struck out on his own Nov. 13, welcomed a son, Jayden Alexander, with wife Crystal two days later and had his first career winner Dec. 7 at Turfway Park.

“The best way I can explain it is I’ve always wanted to train,” Ortiz, 30, said during a renovation break Tuesday morning at Oaklawn. “It’s always been my main goal. Can’t wait to train because I can be this person, be successful, buy this and buy that. Now, literally, since my son was born, I look at my barn and say, ‘I just want to do it for him.’ My priorities changed instantly.”

Professionally, Ortiz begins 2017 with a 13-horse string at Oaklawn and two victories from 12 career starters. Ortiz followed up his victory at Turfway Park with another, when Marine Pilot broke his maiden Dec. 10 at Remington Park. Marine Pilot, a 4-year-old Line of David gelding, is owned by Ortiz’s major client, Thomas Julian.

“He’s the guy that got me started,” said Ortiz, who claimed heavily on behalf of the Oklahoman last fall in Kentucky.

Ortiz said his stable is a “good balance” between a few “nice” allowance runners and claimers.

She’s a Bootsy Too, who won her first two career starts at the 2016 Oaklawn meeting, finished second in the $75,000 Mahoning Valley Distaff Stakes Nov. 21 at Mahoning Valley in her last start.

Ortiz said All Right, who broke his maiden in the $350,000 Kentucky Downs Juvenile Stakes Sept. 3 at Kentucky Downs, is under consideration for the $150,000 Smarty Jones Stakes for 3-year-olds Jan. 16. She’s a Bootsy Too and All Right had been trained by Gorder, who is about to complete a reported 60-day suspension for a medication violation involving one of his horses.

Ortiz saddled his first starter Sept. 5 at Ellis Park before officially going out on his own in November. He had spent the last five years, including some winters at Oaklawn, with Gorder.

“When I was 21, I did say what I wanted to do was to train by the time I turned 30,” said Ortiz, who gets on many of horses in the morning. “That was just a little silly goal that I set for myself. When I started being an assistant trainer, and helping run barns, I knew that was what I wanted to do.”