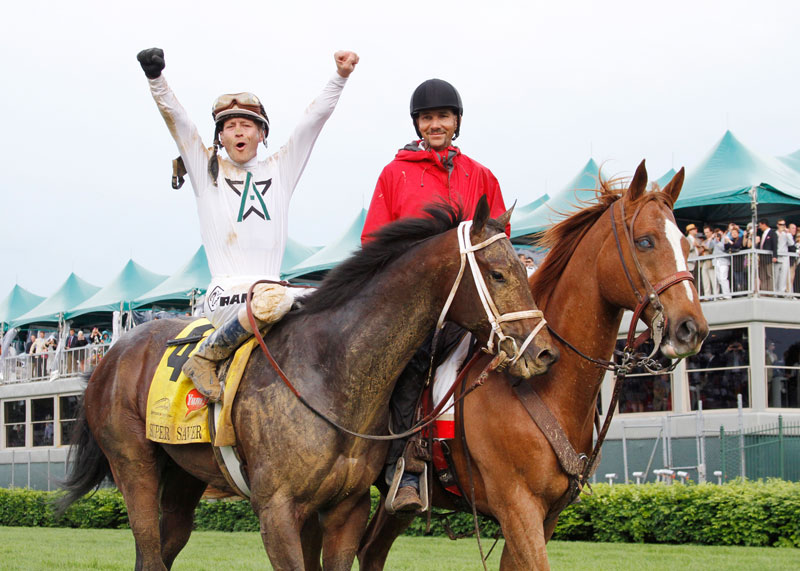 Borel, 49, recently returned from New York, where he went for Friday’s Hall of Fame ceremony. His agent upon his return will be Frank Bernis, who also lines up the mounts for Brian Hernandez Jr. Of the start date, Borel said, “I told him about six, seven more days, so I can be exactly where I want to be with fitness and everything.” He said he wanted to get some riding in before Kentucky Downs and Churchill Downs begin their September meets.

“When you love something, it’s hard to break (away),” he said. “This is all I know how to do, and I love it. And I’m healthy. If I wasn’t healthy, I could walk away. But I’m doing so good now. I’m not fighting my weight. I’m so happy.”

Borel, riding then at Oaklawn Park, retired suddenly March 30 with little explanation other than telling his former agent at it was just time in a career that began in 1983 and included fracturing almost every bone in his body at one time or another. He returned to the Louisville area in early July, staying with trainer Buff Bradley and getting on some horses in the morning.

Borel said Monday that he was conflicted when he quit riding at Oaklawn, that he was getting pressure from Lisa Borel to retire and return to Central Florida, where she lived and had show horses. While the jockey and Lisa were in a long-time relationship and she took his name, he said they never were married. Borel said he went to Florida, but the relationship didn’t work out.

He returned to his native Louisiana to spend time with family, then came to Kentucky in early summer, staying with trainer Buff Bradley, then soon getting on the pony and working horses. On July 2, he said he hadn’t discounted a return to riding but needed time to think about it.

Borel was famous for his relentless work ethic. Of retirement, Borel said: “I didn’t like it. I took enough time off. It wasn’t fun anymore. It came to point where this is all I know how to do, I guess. And I’m healthy. Some people quit because they’re tired of it. I’m not tired of it. I was in New York for like two weeks, getting on some horses for ‘Coach,’ Wayne Lukas, and he said, ‘You’re not ready to retire.’ And I’m happy. I just want to come back and ride and see what happens.”

Borel won riding titles at Ellis in 1995 and 2011. He won the Kentucky Derby aboard Street Sense (2007), Mine That Bird (2009) and Super Saver (2010), the only jockey to win America’s most famous race three times in four years. He also was the rider of new Hall of Fame inductee Rachel Alexandra, the 2007 Horse of the Year upon whom he won the Kentucky Oaks by a record 20 lengths and then beat the boys in the Preakness, the Haskell and against older horses in Saratoga’s Woodward.

Borel’s 5,146 victories rank No. 27 all-time. His down-home ways and heart-felt emotion after his Kentucky Derby victories long have made him a fan favorite.