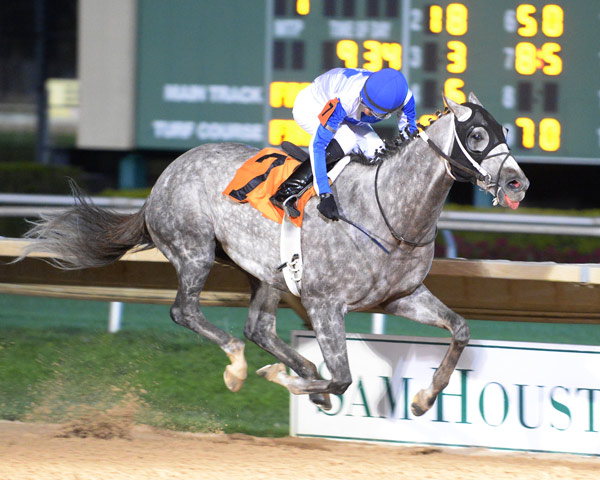 Saturday’s Maxxam Racing Festival at Sam Houston Race Park featured four stakes highlighted by the running of the $100,000 Maxxam Gold Cup. A field of ten was assembled for the mile and one-eighth main track event and the winner was Iron Fist, owned by the partnership of Stonestreet Stables LLC and Regis Racing.

The 5-year-old son of Tapit was trained by top California horseman Jerry Hollendorfer for his first ten starts before uniting with leading Sam Houston Race Park conditioner Steve Asmussen at Saratoga in 2016. He ran second in the Grade 3, Ack at Churchill Downs. His most recent start was a fourth-place finish in the $75,000 Louisiana Stakes on January 21 at Fair Grounds.

Sam Houston Race Park’s leading rider, Iram Diego, was given the mount aboard the Kentucky-bred, who broke from post position seven. He dueled briefly with Tiger of Wales, before assuming the lead and taking command, and winning by 2 ¾ lengths in 1:49.88.

“He does things so easily,” said Diego. “He put me there and I tried to be patient. It was amazing how ran he well. I want to thank Steve for putting me on such good horses.”

“I am lucky to have this horse,” stated Asmussen, who watched the race via simulcast. “Iram rode him very well and I am very happy with his performance tonight.”

Fear The Cowboy was a fast-closing runner-up under jockey Jesus Rios, who had praise for his mount and respect for the winner.

“My horse liked the track and ran well, but the seven was a very, good horse,” said Rios.

Asmussen won the Maxxam Gold Cup twice, with Reporting For Duty in 2008 and Z Humor in 2011.

“This was a very good running of the Maxxam,” added Asmussen.

The Maxxam Gold Cup at Sam Houston Race Park had its first running in 1994, and has produced an outstanding roster of distance specialists. Past champions include Student Council, Valhol, Alumni Hall, Cease, Unstoppable U and Red Rifle. Last year’s Maxxam champion was Mobile Bay, who became a millionaire on February 11th at Delta Downs.

Partly Mocha Returns to the Winner’s Circle in the $50,000 Bucharest Turf Sprint
The first of three turf stakes on the card was the running of the five-furlong $50,000 Bucharest Turf Sprint. It was another solid score for Partly Mocha, owned by Sarah and Kenneth Ramsey. The 8-year-old son of Half Ours, trained by Mike Maker won the Frontier Utilities Turf Sprint on January 29 with a rail-skimming ride by Jose Ortiz.

Tonight Maker gave the call to Colby Hernandez, who caught the early pacesetter and defending champion, American Sailor in the final jump. The final time, over the firm Connally Turf Course was :57.44.

“I watched the replay and saw the kind of speed he has,” said Hernandez. “He comes running every time. I was just the passenger. I want to thank Mike and the Ramseys for giving me the mount.”

“He ran a great race,” said Maker, who was reached by phone following the stakes. “This is a very nice and consistent horse.”

American Sailor, owned by Joe Sharp, who won the Risen Star today at Fair Grounds, broke alertly under C. J. McMahon and cruised through the opening quarter-mile in :22:71 and was fully extended headed toward the wire. Hernandez surged by on the outside, scoring by a neck. Mascherato ran third, followed by Wings Locked Up and
Dance Proudly.

Partly Mocha ($3.60) will likely make his next start at Keeneland, according to Maker.

Stormquility Scores From Off the Pace in the $50,000 Jersey Lilly Stakes
Stormquility, owned by Stacy and Steve Uhland and Barry Koch made her second start of the 2017 Sam Houston Race Park Thoroughbred meeting one to remember. The 6-year-old daughter of After Market ran a game second in the $50,000 Houston Distaff on January 29, and came back with renewed confidence in tonight’s $50,000 Jersey Lilly Stakes.

Trained by Tim Williams, the Kentucky-bred mare was freshened following her third-place finish in the Ricks Memorial at Remington Park last September. She arrived in Houston in December and posted three solid works before making her first start of the year in the Distaff. Curtis Kimes rode her then and had the return call tonight, settling his charge off the pace, then picking off horses and winning by a neck.

“She is just a game runner and the previous race set her up nicely for this,” said Kimes. “There wasn’t a ton of speed, so I knew she had plenty left at the end.”

Stormquility covered the mile and one-sixteenth turf stakes in a final time of 1:45.66, winning in a neck over Susie Bee, who also came off the pace under rider DeShawn Parker.

“She likes the Sam Houston turf course,” said co-owner Steve Koch. “We were proud of how well she ran in both Houston stakes off her layoff.”

Stormquility returned $8.60 for the win. It marked her sixth career tally from 26 starts. Early pacesetter, Enchanteresse under Sophie Doyle, completed the trifecta, followed by Selenite, Another Bond Girl, defending champion, Mexican Miss and Event of Default.

Taco, owned by the partnership of Kathleen Amaya, Raffaele Centofanti and Daniel Alonso, put his three-race win streak on the line. The son of Gio Ponti has posted two wins at Gulfstream Park and shipped in off a solid allowance score at Fair Grounds.

“We’ve had the horse since he was a baby, and really like how far he has come,” said trainer Efren Loza, Jr. “We’ll check him out after this race and decide where he will go next.”

“We’re very excited to see how far Taco can go,” said co-owner Alonso. “Efren has done great job with him and we are looking forward to the future.”

Fast Talkin Man, with Efigenio Garcia Ruiz in the irons was third with Valentine Street closing for fourth.

This was the second year that the Texas Heritage Stakes will be contested on the Connally Turf Course. It has been a springboard race for several notable 3-year-olds including Departing, who won in 2013, then added four graded stakes. Kip Deville, captured the 2006 edition of the Texas Heritage Stakes, before winning the 2007 Breeders’ Cup Mile at Monmouth Park.