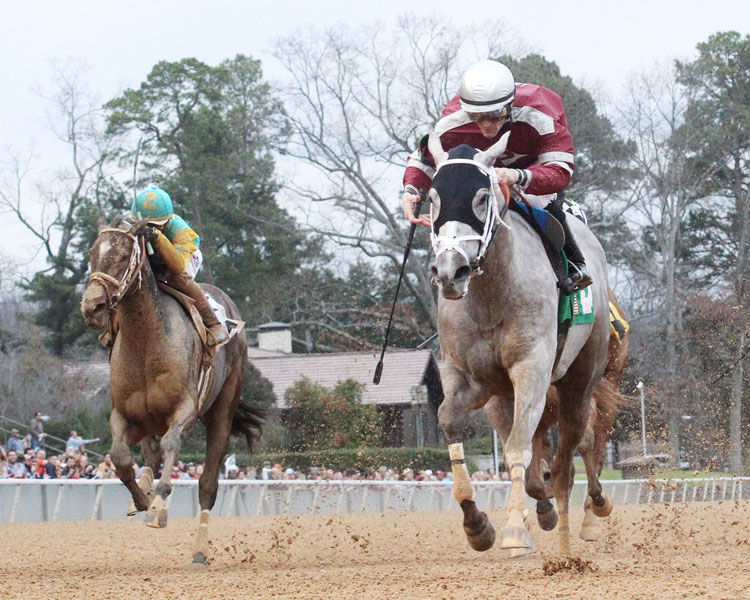 The number of registered Thoroughbreds born in Iowa in 2014 was 253, or 1.1 percent of the entire North American crop. But two are in graded stakes during Oaklawn Park’s Racing Festival of the South: Rockin Rudy in Saturday’s $1 million Arkansas Derby (G1) and Chanel’s Legacy in Friday’s $400,000 Fantasy (G3).

Both were bred by Iowa HBPA board member Allen Poindexter, who owns Chanel’s Legacy and sold Rockin Rudy for $100,000 as a yearling at Keeneland. Owner Paul Reddam and trainer Doug O’Neill in turn bought Rockin Rudy privately several months ago from trainer John Brocklebank.

Rockin Rudy, who won a Del Mar maiden race by 11 lengths in his debut, has run twice for his new connections, finishing second in a pair of 6 1/2-furlong sprint races. But O’Neill said those were the only races that presented themselves and “the whole time we’ve been dreaming about stretching him out on dirt.”

Before you think O’Neill and Reddam — winners of the 2012 Kentucky Derby with I’ll Have Another and last year with Nyquist — are being overly ambitious, consider that they won last week’s $1 million Toyota Blue Grass at Keeneland with the maiden Irap. Rockin Rudy has never before been in a graded stakes, but he’s been in the winner’s circle.

“I don’t even know much about Iowa-breds,” O’Neill said by phone. “But Rockin Rudy is proof whether you’re Cal-bred, Kentucky-bred, Iowa-bred you can be a racehorse, no matter where you’re from. He’s just a real professional, though he’s lightly raced. That’s a credit to Mr. John Brocklebank, who had him. He took his time with him, then he broke his maiden so impressively and needed some more time off. When he came up for sale when he got back into training, Reddam Racing and I jumped all over it. I’m a Michigan-bred, so I love the Midwest.”

If Rockin Rudy is trying to take an unusual path to the Derby, O’Neill said: “If they’re doing well, Paul is OK with writing those checks. Because it’s not cheap to put a horse on the plane and travel somewhere when there’s a lot of uncertainty. But Paul and Zillah are willing to take that risk if the horse is doing well. That’s really the only way you have a chance for a horse like Irap to win the Blue Grass or Rockin Rudy to win the Arkansas Derby.

“… You try to surround yourself with the best prospects you can get your hands on. And then you try to think big. And if they’re staying injury-free and doing well and you have connections like Reddam Racing, you take chances.”

Rockin Ready obviously has talent. He’s also very fast, leading his races in :21 for the first quarter-mile and :43 and change for the half-mile. For the Arkansas Derby, the blinkers he’s worn throughout come off.

“With the blinkers off, he’s very rateable,” O’Neill said. “I know he looks extremely fast on paper. He’s going to be forwardly placed — he’s just fast. But he’s definitely not an ‘accelerator-stuck’ kind of horse, or not a need-the-lead horse, we don’t think.”

Poindexter has about 60 mares, selling most of the foals. While he breeds them all to Kentucky stallions, he has them foal in an array of states, which includes New York, Louisiana, Oklahoma, Pennsylvania and Kentucky (including the stakes-winning Cool Arrow). This year he says he will foal 18 mares in Iowa.

“They’re all Kentucky stallions, and I like to think they’re Kentucky-quality mares,” he said. “… I find that the market doesn’t really care that they were foaled in Iowa.”

He said he likes having Iowa-breds because of the state’s flexible rules. He also said that people in Iowa will pay good money for a well-conformed horse.

“I’ve had one heck of a 3-year-old crop of Iowa-breds,” he said. “Now, I think I’ve got some very good ones coming up with my 2-year-olds this year. I have an Into Mischief filly that is an Iowa-bred that I think will bring a lot of money. The thing I pride myself on is that my Iowa-breds can run anywhere. Right now we have one in Dubai, one in Japan and I’ve had three graded-stakes horses this year from that crop of Iowa-breds.

“There was a time when people said, ‘Well, it’s an Iowa-bred.’ I wanted to change that mental thought, people thinking that because they foal in Iowa that they can’t be racehorses everywhere. I want people to buy with confidence that if they buy an Iowa-bred from me, they can run anywhere.”

Chanel’s Legacy won Oaklawn’s Jan. 21 Dixie Belle and Feb. 11 Martha Washington before finishing sixth in the March 11 Honeybee. Two weeks later, she was moved up from third to second upon the runner-up’s disqualification in the six-furlong Purple Martin.

“In the Honeybee, she was in good position and displaced (a breathing obstruction) going into the turn, dropped the bit and bit her tongue. With that all happening, she didn’t stop,” Poindexter said. “Two days later, we did a myectomy on her, a simple throat surgery, and then ran her back in two weeks in a sprint race to show her she can breathe. We were going to have to work her anyway. She seems to have come out of that race real well. She’s got a lot of talent.

“She was one of the few I didn’t sell. Since I raise them on the farm and I feed them every day, she was just kind of a pet to me, always had a special attitude. Not mean, but smart and an attitude that she didn’t want to get beat. When she ran in the field with another filly, she always had to be in front. It was one of those things, ‘You’re my baby, and I’m not going to sell you.’”

While Poindexter’s mares and their babies spend most of the year at his farm in Rogersville, Mo., he stresses that each foal represents teams of people in multiple states playing a critical role. Poindexter foals all his Iowa-breds at veterinarian Charles Abraham’s clinic in Cedar Rapids. His mares, along with their new foals, go to Tim and Nancy Hamlin’s Wynnstay Farm in Winchester when waiting to be bred in Kentucky. Samantha Kamen is his farm manager in Missouri.

“We all work as a team,” he said. “It really takes everybody to have success.”

Iowa-born horses are in four other races on Oaklawn’s showcase card Saturday.

Umbrella Stable’s 2016 Iowa-bred Horse of the Year and 3-year-old champ One Fine Dream races in the third race Saturday, a second-level allowance race carrying an $83,000 pot. Claim to Fame Stable’s Net Gain, the 2015 Iowa 3-year-old colt champion, competes in the fourth race, also a second-level allowance. Excessive, the 2015 Cyclone Handicap winner who is owned and was bred by Poindexter, is in the fifth race, another allowance event. Lynn Chleborad and Glynn A Puryear Jr.’s Langs Legend is in the 10th, a $30,000 starter-allowance.