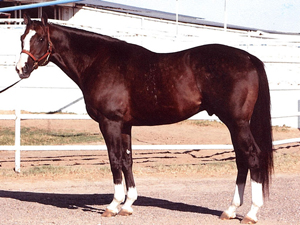 Texas stallion Intimidator stole the spotlight on Saturday night at Retama Park as his progeny won both divisions of the $75,000 Texas Stallion Stakes for 2-year-olds. The card also featured the $50,000 Fiesta Mile for accredited Texas-bred fillies and mares on the turf.

In the Darby’s Daughter division for fillies, Connie Scherr’s homebred Esscalator drew clear to win by 4 ½ lengths with Glen Murphy up for trainer Steve Asmussen. The Texas-bred covered six furlongs in 1:11.16 after leading all the way while setting fractions of :22.08 and :45.79.

This was just the third career start for Esscalator, who finished third in her career debut and then broke her maiden in wire-to-wire fashion at Remington Park. Esscalator, who is out of the Seneca Jones filly Esseneca, now has earnings of $64,457.

Clarence Scharbauer Jr.’s homebred Tastefullyxcessive, a daughter of Valor Farm stallion Early Flyer, finished a clear second. Another Valor Farm stallion, My Golden Song, was represented by third-place finisher Platinum Song, who came into the race after a second-place effort in the Permian Basin Stakes at Zia Park. Platinum Song runs for Scott Brown and was also bred by Scharbauer.

My Golden Belle (by My Golden Song), Falling Star (Too Much Bling) and Witt’s Expectation (Special Rate) completed the order of finish.

In the My Dandy division for colts and geldings, owner Connie Scherr scored again with homebred Estrickator, also by Intimidator. Just like Esscalator earlier on the card, Estrickator jumped out to an early lead and never looked back before hitting the wire in 1:11.63 after fractions of :22.23 and :45.73. Estrickator prevailed by 1 ¾ lengths with Glen Murphy riding for trainer Steve Asmussen, the same connections as Esscalator.

Estrickator broke his maiden at first asking at Churchill Downs in May and then placed in a division of the Texas Stallion Stakes at Lone Star Park, the Kip Deville Stakes at Remington Park and the Governor’s Cup Stakes at Zia Park. The Pennsylvania-bred also won an allowance contest at Remington and has now earned $117,418 with a record of 6-3-1-2.

Both of Scherr’s winners are closely related as Estrickator is out of the Clever Trick mare Estrick, who is the dam of Esseneca, who in turn produced Esscalator. Both are also by the Gone West stallion Intimidator, who stands at Asmussen Horse Center in Laredo. Intimidator is also the sire of Westernator, a 2-year-old stakes winner this year in Louisiana.

In the Fiesta Mile, Sylvia Baird’s homebred Smiles Golden Song made her stakes debut a winning one as she closed strongly under jockey Weldon Cloninger Jr. to win by 1 ½ lengths in 1:35.55. The Larry Stroope trainee is now undefeated in three starts at Retama, with the last two wins coming on the turf.

Smiles Golden Song, a daughter of Valor Farm stallion My Golden Song, has now won five of 11 career starts with earnings of $92,640. The filly did not race as a 2-year-old and has blossomed during a busy campaign as a 3-year-old. She broke her maiden in a six-furlong sprint on the main track at Lone Star Park and then won her turf debut there going 1 1/16 miles. She took a brief break from racing after a fourth-place finish in August at Louisiana Downs and then launched her current three-race winning streak at Retama. Smiles Golden Song is out of Smile mare Texas Smile.