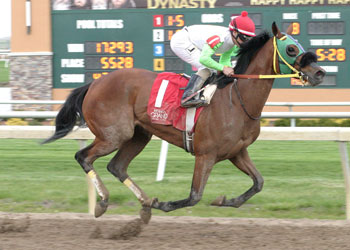 It didn’t take Lady Fog Horn very much time to get back to the winner’s circle as a 4-year-old. Indiana’s Horse of the Year in 2015 found just the room she needed to stride out to victory in the afternoon’s eighth race, an allowance optional claiming event running at a distance of one mile.

Guided by regular jockey Albin Jimenez, Lady Fog Horn showed just enough speed to maintain her inside post in the reduced field of six starters. Lizzie Belle and Tommy Pompell were the pacesetters of the race, and the field was tightly bunched heading into the final turn.

In the final turn, it was evident that Lady Fog Horn had reserved speed for the stretch and only needed a little room to advance. The four-year-old daughter of Zavata was able to squeeze between horses at the top of the lane and hit another gear, rallying home to a one and one-half length win over Luvthatmustang and Cheyanna Patrick, who was in town only for a few days to ride before returning to college at University of South Florida at Tampa where she is studying pre-law. Bethany Belle and Marcelino Pedroza moved up for third. The time of the one mile event was 1:38.32.

Lady Fog Horn paid $2.60, $2.20, and $2.10 as the heavy favorite of the field. The start was her first of 2016 for trainer Tony Granitz, who is in the process of relocating his family and his operation to Central Indiana. Stuart Grant’s The Elkstone Group owns Lady Fog Horn, who increased her career bankroll to more than $425,000.

“She (Lady Fog Horn) always has lots of speed,” said Jimenez, the returning leading jockey champ at Indiana Grand. “I took a little hold of her early because I didn’t want to use her up early and she relaxed. She is the best horse I have ever ridden.”

Jimenez guided Lady Fog Horn to all but one of her six wins in 2015 for Granitz. The native of Panama is the returning jockey champ from 2015. He returns to Indiana fresh off another leading jockey title at Turfway Park earlier this year.

Lady Fog Horn was crowned Indiana’s Horse of the Year at the annual Indiana Thoroughbred Owners and Breeders Association banquet held Saturday, April 16 at Indiana Grand. In addition to overall honors, she was also named Three-Year-Old Indiana Sired Filly of the Year for 2015.