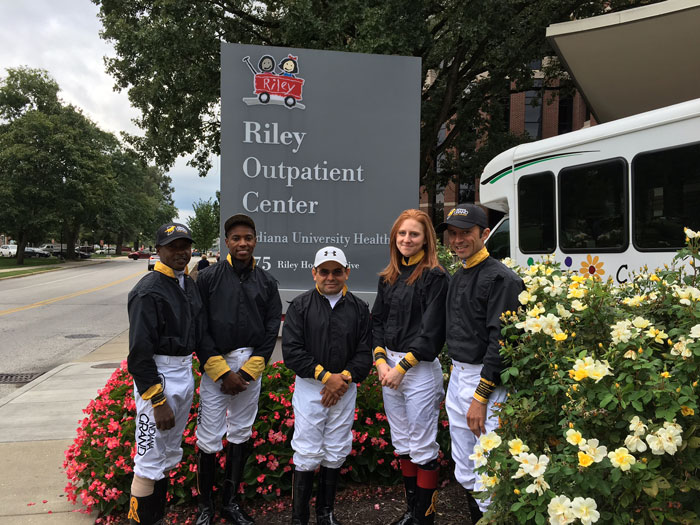 Five jockeys from Indiana Grand Racing & Casino visited Riley Hospital for Children in downtown Indianapolis Thursday, Sept. 29 in support of Childhood Cancer Awareness Month. The jockeys visited with children in the Child Life Zone area of the hospital, playing games, painting, shooting pool and playing video games during the one and one-half-hour session.

The movement began in 2014 when local Thoroughbred owner and breeder Mike McCauley and his wife, Marcie, wanted to do something to show support for Childhood Cancer Awareness Month, which is each year in September. Their daughter, Cierra, battled cancer and is now cancer free, thanks to the efforts of Riley Hospital for Children. McCauley contacted The Jockeys’ Guild, who in turn, got behind the program. Jockeys at Indiana Grand wore gold ribbon patches on their boots and pants during September 2014. Other tracks soon followed. Today, it is a national movement across the United States to show support for the cause.

In conjunction with the national awareness movement, jockeys from racetracks across the nation also make visits to their area children’s hospitals. This is the third straight year that Indiana Grand’s jockeys have made the trip to Riley Hospital for Children.

Attending this year’s event included Kaylia Albright, Shanley Jackson, Malcolm Franklin, Leandro Goncalves and Eddie Perez. The jockeys interacted with the kids and also passed out goggles provided by The Jockeys’ Guild. They also provided small stuffed horses to children during the visit.

“This trip is always very rewarding to us,” said Goncalves, who is a three-time leading rider at Indiana Grand. “We always have fun talking with the kids, and it is also very humbling and makes you very appreciative of life when you see what some children are facing.”