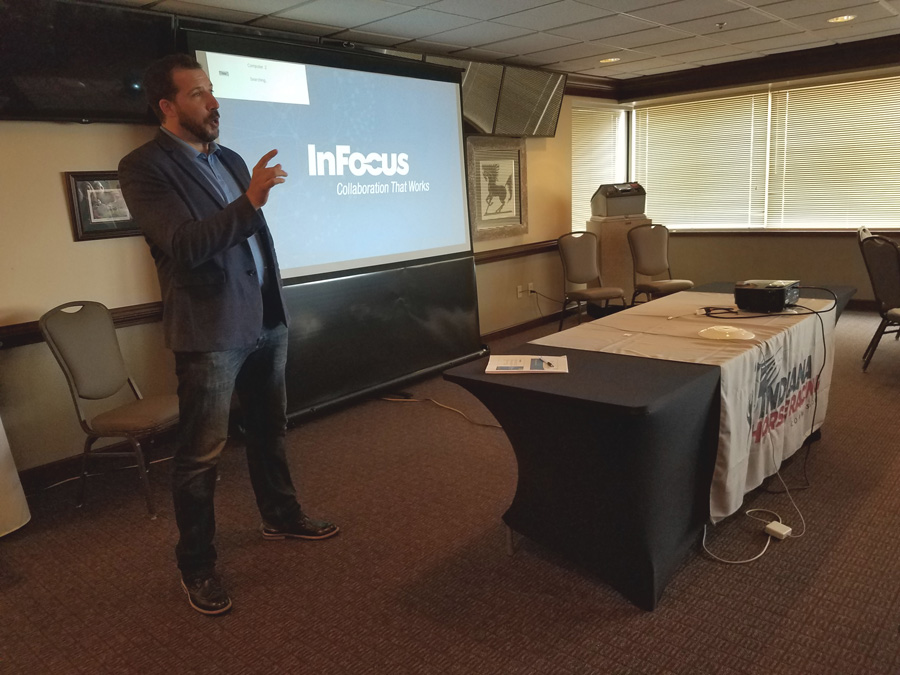 Attendees listened to presenters Anthony MacDonald from TheStable.ca and Harlan Malter from Ironhorse Racing Stable LLC as they talked about their different paths into the horse racing industry and how they became involved in organizing successful fractional ownership programs.

Both Malter and MacDonald felt that one of the biggest things ownership groups do is bring the everyday person to the track to not only watch their horse race, but to bet on the races and bring friends and family along to share in the excitement.

“People that get involved in this sport just love it so much, we know that is what is going to keep horse racing going,” Malter pointed out.

Topics such as creating a group from the ground up, handling the small details, working with tracks and commissions and their own successes and failures were covered in the afternoon seminar. One such success was the purchase of a 2012 Indiana-bred colt by Kantharos at the Ocala Breeders Sale for $43,000 four years ago. That purchase has led to multiple Indiana-bred stakes wins, a Grade 2 Woodford Stakes win at Keeneland and a trip to the 2017 Breeders Cup World Championship with Bucchero for Ironhorse. Recently named Indiana Horse of the Year, Bucchero has now earned more than $770,700.

Ironhorse Racing represented smaller ownership groups, while TheStable.ca represented groups on a larger scale—currently with 103 Standardbreds in training predominantly in Ontario, but also in the United States.

“One of the ways we grew was we reached out to trainers that have seen their barns dwindle and offer them 10-20 horses to get back on the track,” said MacDonald. “So, fractional ownership groups not only help the everyday person get into horse racing, but helps those already in horse racing continue to thrive.”

Some members of the Indiana Grand Racing Club, Grand Gesture Stable, attended the seminar to gain more knowledge in growing their participation in the sport they love. Nate Brannin became a member of Grand Gesture last year, and now not only still participates in the club, but has 25 percent ownership with another horse in the Anthony Granitz stable.

“I’ve always had a passion for horse racing, and horses in general,” said Brannin. “However, I don’t live in the country and I don’t own a farm. I’m hoping to expand to owning 25 percent of two horses with Tony next year. I have a dream of starting a fractional ownership team of my own, like Ironhorse Racing, utilizing only Indiana-bred horses.”

Both presenters were open with attendees and offered their contact information should they have any further questions or are looking for guidance to start their own programs.

“We appreciate Harlan and Anthony taking the time to meet with everyone and share their knowledge and expertise,” said Megan Arszman, Communications Coordinator for the Indiana Horse Racing Commission. “The presenters and I agree that fractional ownership is one of the best ways forward for our industry. Horse racing isn’t just for the rich, but for everyone. Just like how regional breeding programs, such as Indiana’s, is a great way to jump into the industry, whether it’s harness racing, Thoroughbred racing or Quarter Horse racing.”

Offering seminars such as this have been one way the commission hopes to encourage interest for horse racing as well as gauge what owners, breeders and trainers need to succeed in Indiana.

Parts of the seminar were recorded and will be available on the commission’s YouTube channel at a later date.