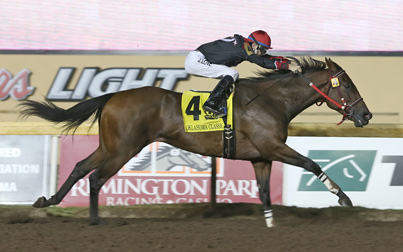 C.R. Trout of Edmond, Okla. doubled his career wins in the Oklahoma Classics in just one night on Saturday at Remington Park. The owner/trainer/breeder of all of his winners came into the 2014 edition with three previous triumphs then promptly won three more including the richest race of the night as Imahit repeated in the Classics Cup, presented by Chickasaw Nation of Oklahoma, powered by TVG.

The Trout contingent of runners thrilled onlookers throughout the night as Shotgun Kowboy drew away easily to win the Juvenile and Bringinginthelute rallied from next to last to win the Distaff Turf. In the grand finale, Imahit shot to the front and led throughout, usually by a wide margin, in posting his second straight win in the $155,500 event.

Under Jareth Loveberry, Imahit immediately took the lead in the 1-1/16 miles Cup and the 5-year-old gelding had things his way from that point.

“The game plan was to let his legs stretch out right out of the gate and get him nice and relaxed to try and get him an easy lead,” noted Loveberry. “He relaxed on the backside and turning for home I gave him a smooch and he just kept picking it up. He’s fast on his own and was relaxed doing it.”

Fast was nearly an understatement as Imahit fired off quarter-mile fractions of :23.26 for the opening quarter; :46.33 for the half-mile and 1:10.16 for three-quarters of a mile while cruising into the stretch with a lead of more than six lengths. Imahit hit one mile in 1:35.96 before crossing the finish in 1:42.77 over the fast main track.

Z Rockstar, favored at 6-5 odds in the wagering, gained ground in the stretch into second, beaten 2-1/4 lengths. Ibaka also gained for third but was 4-1/4 lengths behind the winner.

A 5-year-old gelding by Whywhywhy, Imahit is from the Sahm mare Halo Hit. He won his seventh career race from 20 starts with six of the triumphs at Remington Park. The top prize of $93,300 moved Imahit’s overall bankroll to $392,391.

OKLAHOMA CLASSICS DISTAFF TURF
A group of eight older fillies and mares tested the 7-1/2 furlongs of the $129,425 Classics Distaff Turf, presented by Cherokee Nation Entertainment. C.R. Trout’s Bringinginthelute was the first of his three winners on the night, rallying from next to last to score by 2-1/4 lengths.

Jockey Luis Quinonez let the 4-year-old filly sit over 10 lengths behind during the backstretch of the race before launching a rally coming out of the final turn. Bringinginthelute rolled wide and clear into the stretch with authority to blow past all rivals, crossing the finish in 1:28.83 over the firm course.

Sooner Superstar and Ridgeofstone dueled for the early lead, cooking quarter-mile splits of :22.89 for the opener then :45.75 for the half-mile before giving way to Katour who led briefly in the stretch. None had a match for the effort of the winner who was followed in second by Okie Nova while Katour held third. Ridgeofstone was the beaten 2-1 wagering favorite, finishing sixth, 11 lengths from the victor.

The win was the third from 13 starts for Bringinginthelute with all three of the scores taking place at Remington Park. A daughter of Midnight Lute from the Pioneering mare Starry Pie, Bringinginthelute picked up $77,655 to move her career earnings to $172,289.

The victory gave Quinonez his 14th career Oklahoma Classics win and his third in the Distaff Turf.

A 12-3/4 length winner on the season’s Opening Night, Shotgun Kowboy was a solid third in the open-company Kip Deville Stakes in late September before moving back against Oklahoma-breds on Classics night. Outclassing his competition, Shotgun Kowboy rolled to a 6-1/2 length win in 1:09.85 for six furlongs.

Under Luis Quinonez, Shotgun Kowboy sat off the pace set by Batman Can who managed a quarter-mile in :22.48 and a half-mile in :46.04. Quinonez asked Shotgun Kowboy leaving the turn and he immediately went to the front before the entire field had straightened away in the stretch, drawing high praise from Trout.

“He’s really matured, this colt, I’ve never had one like him,” said Trout. “He really does everything like a professional. He looked like he was making a pretty good move coming off the turn and we felt pretty confident. Luis (Quinonez) said he still had horse left at the end of the race so that’s good.”

The second win from as many career and Remington Park starts this season was worth $51.800 for Shotgun Kowboy, putting his total earnings to $81,201. He is a son of Kodiak Kowboy from the Siphon (Brazil) mare Shotgun Jane.

The Juvenile win on Shotgun Kowboy was the 15th Oklahoma Classics win for Quinonez and his first in the Juvenile.

OKLAHOMA CLASSICS SPRINT
Chifforobe was bottled up early but gained a fortunate gap between rivals late in the stretch to win the six-furlong $122,800 Oklahoma Classics Sprint, presented by Kaw Nation, for 3-year-olds and upward.

“From the 3/8ths pole I’m just looking for somewhere to go. I’m full of horse and following (Fifth Date) and I’m just thankful my horse had enough heart and guts to go through that small seam,” said winning jockey Lindey Wade. “I just kept encouraging and he kept running.”

The inside path was the winning trip as the 3-2 favorite, Okie Ride, who was the 2011 and 2012 winner of the Classics Sprint had forged his way to the lead with a 4-wide sweep and appeared to be headed for the win. Chifforobe is trained by Jody Pruitt who remarked, “We were just hoping to get a good trip tonight and we did. It got a little tight but we got through.”

The 10-year-old Fifth Date, who finished third in the Classics Sprint in 2008 and won the 2012 Classics Cup, provided much of the pace in the race before fading to fifth. Fifth Date carved out the opening quarter-mile in :22.04 and a half-mile :44.55. Chifforobe crossed the finish in 1:09.25.

Chifforobe edged Okie Ride by a neck with Johnny Whip closed from seventh to finish third, 1-1/4 lengths behind the winner.

Chifforobe, a 4-year-old gelded son of Nobiz Like Shobiz from the Conquistador Cielo mare Aletha, was bred by Chris Duncan & Elizabeth Valando. Owned by Paul Sinclair of Iola, Kan. He earned $73,680 for the win, his ninth from 18 career starts and his third at Remington Park. He now has a total bankroll of $206,830.

OKLAHOMA CLASSICS DISTAFF
The huge closer Okie Smokey won her second career Classics event, taking the $137,500 Distaff, presented by Easter Shawnee Tribe of Oklahoma. A year ago, Okie Smokey scored in the Lassie as a 2-year-old.

Owned and bred by The Richter Family Trust of Perkins, Okla. and trained by Carlos Padilla, Okie Smokey was ridden confidently with a big last to first move by Bryan McNeil.

“There was a bunch of speed in here. They (connections) said to sit back and get her relaxed and when you’re ready to make that one run make sure you’re clear. She had a perfect trip coming around the outside, when I asked her she just took off.”

Okie Smokey was last of 11 in the Distaff until the field reached the second turn of the 1 mile-70 yard affair. Once there, McNeil asked his 3-year-old filly for run and she easily moved wide around all of her rivals, striking the front near the top of the stretch, right down the middle of the lane. Okey Smokey won by 2-1/2 lengths with early pace-setter What Lola Wants battling for second and Eye Love Jeanie moving up the rail late to gain third, 3-3/4 lengths from the winner.

A filly by Cavvy from the Silver Ghost mare Spooky Okie, Okie Smokey won for the third time in nine career races with all victories at Remington Park. The winner’s share of $82,500 moved her total earnings to $175,909.

The Distaff is the first win for Padilla on Classics night while McNeil won his second career race in the program.

CLASSICS DISTAFF SPRINT
Diamond Disco shot to the front soon after the start in the $115,000 Oklahoma Classics Distaff Sprint and pulled off an upset win, holding of the 1-5 favorite, More Than Even by a half-length.

Owner Danny Caldwell, of Poteau, Okla. claimed Diamond Disco from her breeders 7 Cedars Farm in June of this year for $30,000. She had yet to win in four starts since being claimed, including her last three starts over the turf.

More Than Even stalked the pacesetter but could not make up enough ground and paid $2.20 to place and $2.10 to show. Mama’s Mad Money passed horses to finish third at 47-1 and pay $5.80 to show.

Diamond Disco is a 5-year-old mare by Diamond from the Alamocitos mare Alley’s Account. She won her sixth career race from 30 attempts and her third at Remington Park while gaining $69,000 to run her lifetime earnings to $226,979.

The win was the second Classics triumph for Villafranco and the first for Vazquez.

Owned and bred by Darrell Williams of Tulsa, Okla., Robbytyme is trained by Kenny Nolen and was ridden by Jose Medina. The 6-year-old son of Kipling earned $76,020 for his dramatic finish, with a final time of 1:43.19 for the 1-1/16 miles event over firm turf. This was the first year in the history of the Classics that the Turf race was contested at more than one mile.

Robbytyme, a 30-1 longshot rallied from eighth position going into the final turn, gaining wide into the stretch and then holding off Dusty Okie by a neck. Dusty Okey, attempting to repeat in the Turf, battled back in the final yards but could not fare better than second. Polka Joke set the pace and held on for a solid third.

From the Post Up mare Wampum, Robbytyme won his fifth race from 28 starts and his third at Remington Park. His career earnings now stand at $153,451.

Nolen and Medina both won their third career Classics race in the Turf.

OKLAHOMA CLASSICS LASSIE
The $85,500 Lassie, presented by Coors Light, went to Zealous Vision who rolled past the favored Dancing Diva in the stretch to win by 2-1/2 lengths while handling six furlongs in 1:11.08.

Owned by Center Hills Farm and Big Sugar Racing, partnership of Pryor, Okla., Zealous Vision is trained by Tim Martin and was ridden by Alex Birzer. The 2-year-old filly broke her maiden against Oklahoma-breds at Remington Park on Aug. 20 before faltering in an open-company allowance event in September.

Dancing Diva, the beaten 9-5 wagering favorite, held second while Rich Uncle was three lengths behind the winner in third.

The score was worth $51,300 to Zealous Vision, a daughter of The Visualiser from the Awesome Again mare American Sound. Her total earnings have now reached $80,015.