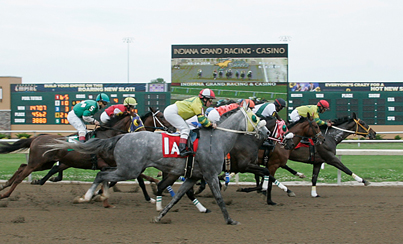 Horses are back on the track, taking one stride closer to the upcoming 13th season of racing at Indiana Grand Racing & Casino. Only a handful of horses took advantage of the first few days of training, which began Thursday, March 19. Horses continue to arrive at the facility that holds just under 1,000 horses. All stalls have been allotted for the upcoming season and the barn area will be at capacity once again when racing resumes Tuesday, April 21, 2015.

“We are excited to move towards a new racing season with even more enhancements for our horsemen and racing fans,” said Jon Schuster, vice president and general manager of racing. “Looking at the response for stalls this season, it’s evident that horsemen are incorporating Indiana Grand into their circuits and as a result, our racing program continues to grow.”

Kevin Greely, director of racing, has several new stables coming in from the Midwest. New trainers on the grounds in 2015 include Cody Autry, who comes to Indiana from Oaklawn Park in Arkansas with 30 horses, John Haran, who will relocate from the Chicago circuit and Roger Brueggemann, who trains exclusively for Midwest Thoroughbreds, one of the top owners in the nation. Owned by Richard and Karen Papiese, Midwest Thoroughbreds race at various tracks with more than 300 horses. Brueggemann will have 24 of the stable’s fleet on the grounds at Indiana Grand for the first time in 2015.

“We are welcoming several new stables into Indiana Grand this season,” said Greely. “The racing program continues to expand and we have also added three new overnight stakes, bringing the total up to 36 on our stakes schedule. We have shifted a few of the races around and will offer four straight days of stakes races capped off by the Grade II Indiana Derby on Saturday, July 18. This will create a multi-day festival leading up to Indiana’s richest race.”

Fernando De La Cruz, 2014 leading rider at Indiana Grand, is slated to return to defend his title. Other returning jockeys include Malcolm Franklin, Rodney Prescott, Francisco Torres and Albin Jimenez. Newcomers on the list this season include Israel Ocampo, a former leading rider at Hawthorne Racecourse and currently riding at Oaklawn Park. Apprentice rider Mitchell Murrill, who is currently riding at Fair Grounds, is also expected to move his tack to Indiana for the opening of the meet Tuesday, April 21.

In addition to the Indiana Derby, other top Thoroughbred stakes during the season includes the $200,000-added Grade II Indiana Oaks on Derby Night Saturday, July 18, the top turf stakes of the season the Listed $200,000-added Centaur Stakes for three-year-olds set for Wednesday, Sept. 9 and the first Indiana Sprint Championships, which will include six stakes all at a distance of six furlongs on Wednesday, Sept. 30.  The 120-day race meet will conclude Saturday, Oct. 31 with four stakes races highlighting the inaugural “Indiana Champions Night” featuring the best state-bred horses of Indiana.

Live Thoroughbred and Quarter Horse racing returns to Indiana Grand Tuesday, April 21. The 120-day race meet will be conducted on Tuesdays, Wednesdays and Fridays at 2:05 p.m. with first post for Saturdays set at 6:05 p.m. Thursday racing will be added Sept. 17.