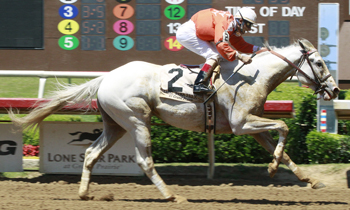 The Texas Stallion Stakes Series for foals of 2010 wrapped up on Saturday at Lone Star Park with two divisions run at one mile for a purse of $75,000 apiece.

In the Stymie division for 3-year-old colts and geldings, Hall’s Family Trust’s homebred He Has Bling pulled off a 6-1 upset with Miguel Hernandez riding for trainer Danele Durham. He Has Bling, a Texas-bred gelding by Lane’s End Texas stallion Too Much Bling, tracked the leaders and then made a three-wide move on the far turn before drawing clear by 2 ¼ lengths in a time of 1:39.83.

“He ran his heart out,” said Durham. “I told Miguel, when you start coming down the lane, this horse has a lot of heart; ask him and keep asking him and he will give it.”

He Has Bling only hit the board once in his first six career starts before breaking through with a maiden victory against $20,000 claimers at Oaklawn Park in January. Since then, the gelding has been first or second in five of six outings with three seconds at Oaklawn and an allowance win at Lone Star before picking up his first stakes victory. His record now stands at 13-3-3-1 with earnings of $94,660. He Has Bling is out of the Stravinsky mare Deeya Maria and became the 10th stakes winner sired by Too Much Bling from only 58 starters to date. Too Much Bling has sired the earners of nearly $550,000 so far this year to easily top the list of leading sires in Texas.

Hall’s Family Trust and Durham also campaign Texas-bred Texas Bling, another son of Too Much Bling who won last year’s $300,000 Remington Springboard Mile Stakes in Oklahoma and them competed in three graded stakes at Oaklawn this year culminating with a start in the $1 million Arkansas Derby (G1).

End Zone Athletics Inc.’s Meme Jo, another gelding by Too Much Bling who finished second in the Jim’s Orbit division of the Texas Stallion Stakes at Sam Houston Race Park in February, filled that spot again with Glen Murphy in the saddle for trainer Karl Broberg. Meme Jo, who was bred by Jeanne Bruce, has banked $55,755 in six career starts.

Littlebrother Farm LLC’s homebred Breathethefire, a colt by Lane’s End Texas stallion Valid Expectations, crossed the wire third. The Steve Asmussen trainee has hit the board in three other stakes and his earnings now stand at $59,894 in eight trips to the post.

Odds-on favorite and three-time stakes winner Worldventurer, a Wimbledon gelding who was making his first start for owner Peter Redekop B.C. Ltd. since being purchased for $150,000 at the Fasig-Tipton Texas 2-Year-Olds in Training and Horse of Racing Age Sale, battled for the lead throughout and faded to fourth. Tarmac, a gelding by Midway Road, completed the field of five.