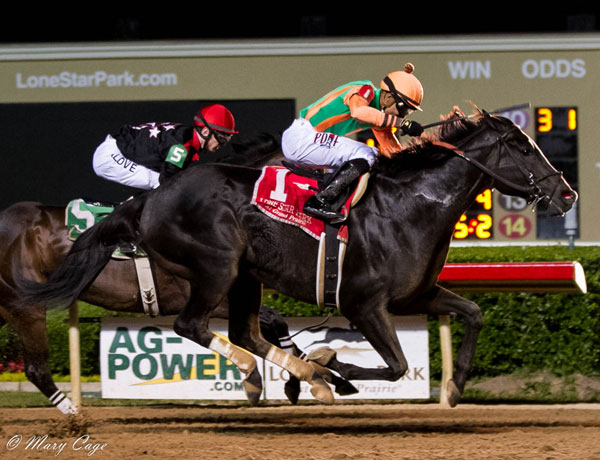 It was Great Minds piloted by C.J. McMahon in front by a half-length at the wire in Friday’s 20th edition of the Grade 3, $200,000 Texas Mile, giving both horse and rider their first graded stakes win. This was the third straight victory for the 5-year-old gelded son of Stroll, with McMahon up.

“I knew he had speed,” said McMahon. “I thought if I got a good break and could sit right off the pace he would finish really good so, I just sat in the pocket and when I turned him loose, he really exploded.”

Trained by Al Stall Jr. and bred by Claiborne Farm, Great Minds is owned by NFL star Vince Wilfork, who plays a nose tackle for the Houston Texans. Wilfork is a two-time Super Bowl champion with the New England Patriots.

With Blue Tone and Shotgun Cowboy contesting the pace in front, Great Minds settled in tracking position at fractions of 25.01, 48.57, and 1:12.55.  Blue Tone gave way in the far turn leaving it to Shotgun Kowboy. Great Minds made a bid near the 1/8 pole, dueled with the runner-up and was able to prevail by a half-length. It was five lengths back to Carve in third. Final time was 1:37.68.

With the win, Great Minds improved his career record to five wins from 19 starts and increased his career earnings to $283,898.