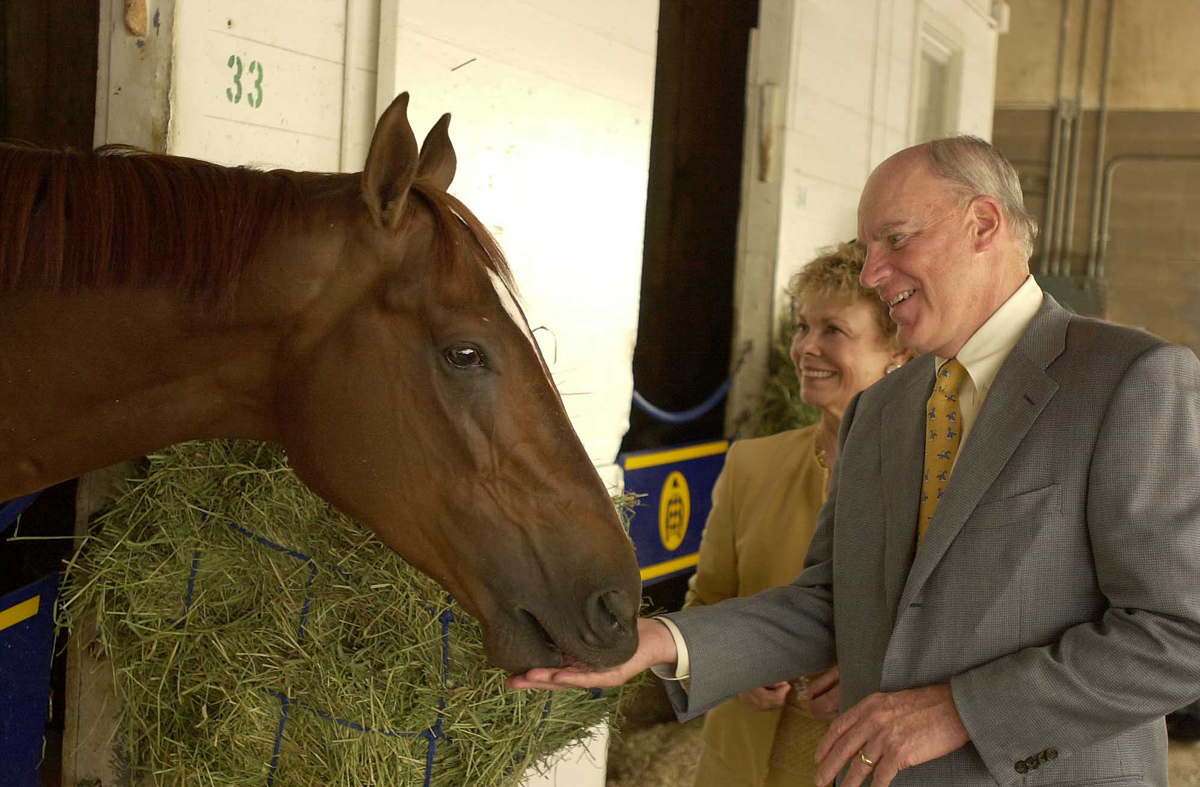 Multiple Grade 1 winner Congaree was euthanized due to the infirmities of old age on Sunday, November 22nd, at Valor Farm near Pilot Point, Texas, where he had been standing prior to being pensioned earlier this year. Owned by Janice McNair, who, with her late husband Bob, bred and raced Congaree in the name of their Stonerside Stable, Congaree was one of a handful of horses the McNairs retained after selling their farm, training center, and bloodstock to Sheikh Mohammed bin Rashid al Maktoum in October of 2008 in order to devote more time to their NFL franchise, the Houston Texans.

“Congaree was such a special horse,” said Janice McNair. “I am so grateful for all the many happy memories Congaree gave us. He was so unique, and had the most loving personality. He was a delight to be around, and it was always such a thrill to watch him run. Congaree was truly the horse of a lifetime for us.”

Trained by Bob Baffert, the chestnut son of Arazi out of Mari’s Sheba raced 25 times, from age two to age six, including an amazing streak of 22 consecutive starts in graded stakes, beginning with a win in the Grade 2 Wood Memorial in 2001 in his stakes debut. Overall, Congaree won five Grade 1 stakes, from seven to ten furlongs, and five other graded stakes, while placing in another six, including the 2001 Kentucky Derby and Preakness. His time for the one-mile split in the Derby remains the co-second fastest mile in the classic’s history. Congaree also ran the fastest dirt mile in North America in 2002, winning the Grade 1 Cigar Mile Handicap at Aqueduct in 1:33.11. He came back to win that race again in 2003 and remains the only two-time winner of the Cigar Mile. Congaree was undefeated at Aqueduct, winning three Grade 1s and a Grade 2. Overall, he competed at ten tracks in five states coast to coast.

“He was just a special horse,” said Baffert. “We had gotten to know the McNairs after training Chilukki for them, but it was through Congaree that we really got to know the whole family, and we made some great memories. Congaree was a really fast horse, and could carry his speed. His Kentucky Derby performance was one of the best, he set a blistering pace for the mile and hung in gamely. Another race that stands out in my memory was his Hollywood Gold Cup win in 2003. He just destroyed the competition. We raced all over the country with him, and it was just so much fun to show up with a horse like Congaree.

“First time I saw him, he really caught my eye,” Baffert continued. “I was looking at all these wellbred yearlings at Stonerside and saw him in a paddock nearby, and I said ‘Wow, can I take that chestnut? I’ll trade you back one of these Danzigs for him.’ He didn’t have the most perfect conformation, but he made up for it with heart. He was a real noble horse, sweet, kind, just a great personality.”

Congaree barely survived a difficult birth, presenting at 152 pounds – well above average size, especially for a first foal. Sickly and confined to stall rest due to several broken ribs, he quickly became a staff favorite with his friendly personality. Janice McNair remembers feeding him peppermints on the many visits to Kentucky the couple made from their Houston home.

“Congaree loved his peppermints and knew what the rattle of a candy wrapper meant at an early age. He especially seemed to bond with my husband Bob. The two had a special connection, and I know Bob got tremendous joy watching him run. He was such a character, just a very special horse.”

Retired to stud at Adena Springs in Kentucky, he was later moved to New York and eventually to Texas. In total, Congaree has sired 13 stakes winners from 317 starters, including six graded or group winners, with Irish highweighted filly Maoineach and Grade 1 winners Jeranimo ($1,525,364), Don’t Tell Sophia ($1,382,479), and Killer Graces among his leading runners. As a broodmare sire, his daughters include the dams of Grade 2 winner and classics-placed Homerique and 2020 Group 3 winner New Treasure (IRE).

“Congaree was the epitome of what we hoped to accomplish with the Stonerside breeding program,” said John Adger, longtime racing and bloodstock manager for the McNairs. “It was fitting he was our first Grade 1 homebred, as his dam and granddam were part of the purchase of the Elmendorf broodmare band of Jack Kent Cooke in 1997 – an acquisition we considered the cornerstone of the breeding program. Congaree, in fact, earned back nearly the entire cost of that investment with his race earnings. He always gave 100% in every race. He was an Eclipse Award finalist three times – Horse of the Year, Champion Sprinter, and Champion Older Horse.”

“Congaree had so much class,” said Ken Carson, general manager of Valor Farm. “He was a pleasure to be around, an easy-going horse who certainly loved his mints.”

“I am very grateful to all the people who played a part in his life – all our Stonerside staff, Bob Baffert and his team, our friends and family who traveled the country with us to watch him race, and to his many loyal fans who reached out to us over the years,” said Janice McNair. “He’s been at two great farms here in Texas – first Will Farish’s Lane’s End Texas under the excellent care of Danny Shifflett, then after Lane’s End closed, we were fortunate to be able to move him to Douglas Scharbauer’s Valor Farm. We are especially grateful to Farm Manager Donny Denton and the entire crew at Valor for the wonderful care they have given Congaree. We are honored that he has been buried in the cemetery at Valor alongside so many of the great horses owned by the Scharbauer family.”