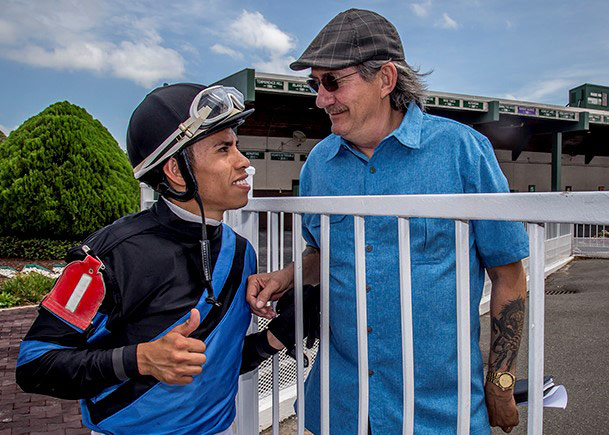 If you are a Texas-based jockey looking to make an impact on the Louisiana circuit, what would it take to make that transition a success? First and foremost, skill in the saddle to ensure that established barns will take notice, and secondly, an agent who is respected by the horsemen and owners.

Well, that formula seems to be clicking nicely in the 2017 Louisiana Downs Thoroughbred season with Gerardo Mora and his agent, Ronald Ardoin.

Born in Palestine, Texas, Mora, 25, had family ties to racing as his uncle, Adrian Ramos, is a veteran rider on the Louisiana and Texas circuit. Mora began working horses in Louisiana and in 2011, rode as an apprentice at Retama Park near San Antonio. Toby Cathey had his book and the two worked well together. In the 2012 Sam Houston Race Park meet, Mora finished in second place to veteran Glen Murphy. He followed that with his first Sam Houston leading rider title in 2013 and successfully defended it the next year against a very competitive jockey colony with many returning riders and the first appearance of top Mountaineer Park rider Deshawn Parker.

Many jockeys get a good share of mounts as apprentices, but only a select few riders maintain a solid win percentage when they must carry full weight. Mora garnered attention for his well-timed finishes and versatility in mastering both the turf and main track. His strong work ethic coupled with his humble personality, drew Ardoin to take his book.

“Toby was getting ready to retire and he called me about Gerry,” said Ardoin. “I had watched him ride as a bug boy and thought he had good hands and a lot of talent. It was also clear that he worked hard and was always looking to learn.”

Who better to learn from than Ardoin, one of the most heralded jockeys on the Louisiana and Texas circuit! His career spanned 30 years with over 32,000 mounts. While the majority of his victories came in this region, Ardoin did have two mounts in the Kentucky Derby; he rode Encolure (1985) and Zarb’s Magic (1996) in racing’s first leg of the Triple Crown. When an injury forced him into retirement in 2003, Ardoin had ridden 5,226 winners with five leading rider titles at Louisiana Downs. He took a few years off, but in his words “got tired of sitting on the couch” and decided to become a jock agent. He was very selective in taking on riders.

Ardoin took Mora’s book at the end of 2015 and they had a good meet last year, with Mora winning 50 races, finishing third behind John Jacinto and Richard Eramia.

Raw talent aside, each race presents different challenges and even the best jockeys have a learning curve. Mora admired Glen Murphy and has tremendous respect for current fellow rider, Richard Eramia. Of course, he taps into Ardoin’s wealth of experience with many of his mounts.

“It’s been great for me,” said Mora. “Ronnie has won over 5,000 races, so he helps me in talking about my horses and about the Louisiana Downs oval. As an agent, he works hard and everybody knows him!”

Both are family men; Ardoin, who will celebrate his 60th birthday next month, and his wife, Patti, make their home in Bossier City. Mora’s wife, Sandra, remains at home in Palestine with their four children.

“It’s hard being away from them,” admitted Mora, who can only get home every two weeks. “Ronnie understands and tells me that it’s okay to take a couple of days off so I can spend time with my wife and kids.”