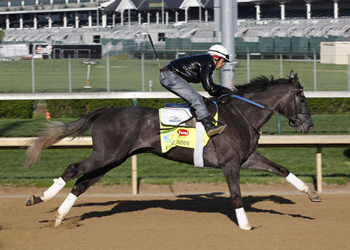 The $100,000 Maxxam Gold Cup at Sam Houston Race Park has had a rich tradition since its first running in 1994. Past champions of the mile and one-eighth main track feature include Sir Cherokee, Valhol, Student Council and Alumni Hall. This year’s edition drew a competitive field of six with entrants from nationally prominent trainers Michael Maker, Kenneth McPeek and Todd Pletcher; who will send his first starter ever to Sam Houston Race Park.

Magic City Thoroughbreds’ Frac Daddy was the runner-up in the 2013 Arkansas Derby before placing 16th in the Grade 1, Kentucky Derby and 14th in the Grade 1, Belmont Stakes. He regained his focus in an allowance wins last August at Saratoga and a second-place showing in the Grade 3 Commonwealth Turf at Churchill Downs on November 16. The son of Florida Derby winner Scat Daddy has been training well at Gulfstream Park for his 2014 bow.

The grey colt will be facing older horses for the first time in the Maxxam Gold Cup, but McPeek has confidence in his charge.

“This is a good colt,” said McPeek,.”He’s been working like a monster, and even though this will be his first start against older horses, I think this is a good spot for him.”

Frac Daddy will be looking for his first career stakes win, and will break from post position two under rider Shane Laviolette.

Leadem in Ken is another talented 4-year-old seeking his first stakes win for trainer Michael Maker and Eclipse Award owners and breeders Sarah and Kenneth Ramsey. The dark bay son of Sky Mesa has made three starts at Fair Grounds, with his most recent race a four-length allowance romp under Rosie Napravnik on February 7. She will fly in Saturday to ride Leadem in Ken as well as Maker’s stakes entrants in the $50,000 Jersey Lilly Stakes for fillies and mares on the turf and the $50,000 Texas Heritage Stakes for 3-year-olds at the distance of one mile.

“He’s been thriving at Fair Grounds,” said Maker of the Ramsey’s homebred. “We think he can get the distance.”

Maker’s trio of Leadem in Ken, Kowboy Boots (Texas Heritage) and Always Kitten (Jersey Lilly) will van in on Friday.

This will be the first time in the history of Sam Houston Race Park that trainer Todd Pletcher has run a horse here. The six-time Eclipse Award Champion Trainer will ship in Red Rifle for WinStar Farm and Twin Creeks Racing Stable.

The 4-year-old son of Giant’s Causeway broke his maiden in his debut last March at Gulfstream Park, and will be making just his sixth career start on Saturday evening. His lone stakes appearance was a fourth-place finish in the Grade 3 Hill Prince on the Belmont Park turf course on June 15. He exits a solid runner-up finish in a $62,500 allowance last month at Gulfstream Park.

“This is a horse we had hopes for last year, but he wasn’t ready for the Triple Crown trail,” said Pletcher. “We gave him some time off, and in his first race back, he didn’t get away well, but rebounded with a very good allowance effort on January 17.”

Pletcher reported that his colt is currently at Fair Grounds and will van over to Sam Houston Race Park on Wednesday. He named Robby Albarado to ride Red Rifle, and the veteran jockey will be seeking his fourth Maxxam Gold Cup victory, with previous wins aboard Valhol (2003); Alumni Hall (2005) and Student Council (2007).

“We feel this is a good opportunity for Red Rifle and Twin Creeks Racing (of Ruston, Louisiana), who bred this colt and live not too far from Sam Houston Race Park,” said the nationally acclaimed conditioner.

Another Maxxam entrant is Texas-bred Texas Air, a convincing winner in the $50,000 Star of Texas Stakes here on January 18 who will break from post five under rider Dakota Wood. Allen Milligan conditions the 6-year-old gelding for owner/breeder Paul Rigali Jr. The remainder of the field includes local allowance winners, Magnum Force, trained by Dallas Keen with Glen Murphy up and Real Appeal Deal. Jockey Fabio Arguello gets the return call for trainer Tim Williams

The Maxxam Gold cup will run as the eighth race of the Saturday evening card, which gets underway at 7:00 pm (CT). The $50,000 Texas Heritage Stakes for 3-year-olds at the distance of one mile is set as race 6 and the $50,000 Jersey Lilly Stakes for fillies and mares on the turf will run as the seventh race.

Always Kitten Headlines the Field in the $50,000 Jersey Lilly Stakes
Always Kitten, a 4-year-old daughter of Kitten’s Joy, has been installed as the 7-2 morning line choice in the $50,000 Jersey Lilly Stakes. Trained by Maker for the Ramseys, the bay filly will be seeking her first victory since capturing the $65,000 TaWee at Indiana Downs on October 5. Napravnik has the mount in the mile and one-sixteenth stakes, which will be run on the Connally Turf Course.

Trainer Michael Stidham will saddle two fillies on Saturday evening. Brown Eyes Blue exits a fifth-place finish in the Pan Zareta at Fair Grounds for Twin Creeks Racing and will be ridden by Albarado. Graded stakes placed Every Way prepped for this with a six-length romp over the Sam Houston Race Park main track on February 10. The 4-year-old daughter of City Zip will be ridden by E. T. Baird.

Ibaka Goes for Third Win in a Row in the $50,000 Texas Heritage Stakes
Two weeks ago Texas-bred Ibaka came flying from last to first to capture the $75,000 Jim’s Orbit division of the Texas Stallion Stakes for his proud owner and breeder Doug Wall of Norman, Oklahoma. The 3-year-old son of Uncle Abbie will return in pursuit of his third consecutive win in the $50,000 Texas Heritage Stakes.

It would be a sweet victory for trainer Bret Calhoun who sent Worldventurer to Houston for the 2013 Texas Heritage, but was denied by a sensational performance by the undefeated Departing.

Wall was surrounded by family and friends who donned “Ibaka” t-shirts and celebrated enthusiastically with the first stakes win by the son of Uncle Abbie.

“We certainly know he can come off the pace,” said Calhoun.  “I would have preferred to have a little more time in between races, but he has been doing well and I know the owners love to see their horse run.”

Calhoun has tapped Lindey Wade to ride Ibaka, who will take on six rivals in the one-mile Texas Heritage stakes including Kowboy Boots, who ran second in the $50,000 Allen’s Landing Stakes under Rosie Napravnik. Fair Grounds allowance winner Sea View Chico ships in for trainer Larry Jones and will be ridden by Albarado.

Maxxam Gold Cup Weather
Saturday is expected to be a clear, sunny day in Houston with an afternoon high of 73 degrees and a low of 60 forecast for the evening. No rain is expected for the end of the week so track conditions should be fast and firm on the Connally Turf course.

Camel and Ostrich Racing to Return Next Weekend
Sam Houston Race Park presents the return of exotic racing featuring Camel and Ostrich races! Due to the popular demand Sam Houston Race Park will host the unpredictable and fun filled races on two nights this year, Friday, March 7 and Saturday, March 8. Each night will feature four camels and five ostriches racing a distance of approximately 100 yards in between live Thoroughbred horse races.