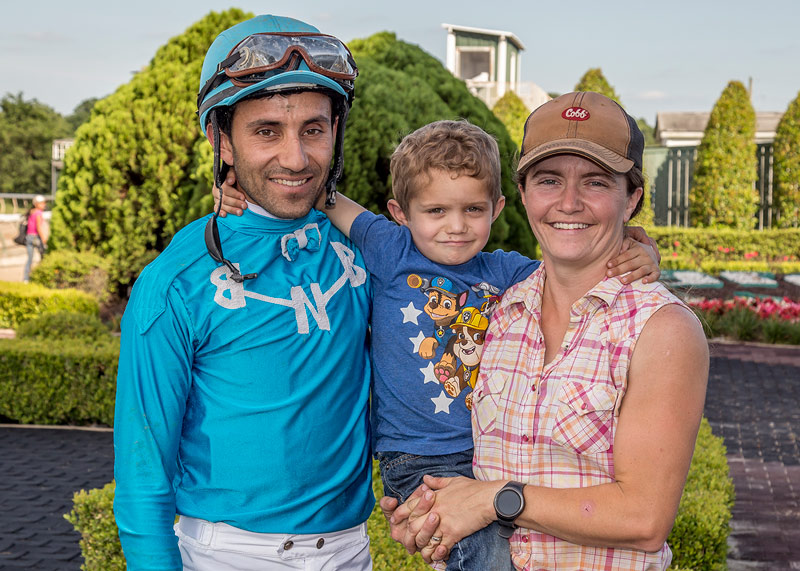 Becoming a jockey was a dream come true for Beverly Burress, who was born in Shreveport, Louisiana and grew up in Jones, Oklahoma. Both her dad, Bobby Burress, and uncle, Billy, had ridden the Louisiana circuit before embarking on second careers as trainers.

She got her license in 2005 and rode for eight years. Burress had an excellent start as an apprentice, winning 29 races at Remington Park and 30 as a bug rider at Oaklawn Park.

“I am the all-time winningest female apprentice at Oaklawn,” said Burress.

Her second year in the saddle, 2006, was her best. She won 66 races and $1.1 million in purses. However, after she lost her bug, she was injured in a spill, and had a difficult time getting named on horses.

“The injury was tough, and then I felt that I had to prove to trainers that I could still win races,” admitted Burress.

Burress continued to ride until 2013, piloting her final mount on September 22, 2013. She had a pretty good reason for hanging up her tack

“I was four months pregnant with my son,” she said.

Burress, 32, and her husband, jockey Juan Larrosa, are proud parents of Juan Jr., who is now 3-years-old. She took out her training license in 2016, and saddled her first winner last November at Delta Downs. It is a true family affair as Juan rides and their son runs the shedrow, barefoot and beloved by the horses.

Burress is off to a very good start in 2017 and has won four races from seven starts at Louisiana Downs. Plus, she is currently tied for leading owner with Patti Turner and Red Rose Racing.

“We are very hands-on,” said Burress of her stable. “Our day begins at 4:00 am and on race days, we don’t leave until after 6 pm, but we love doing what we do.”

And whereas many second or third generation horsemen and women might prefer to impart their own imprint on their training program, Burress loves getting input from her family members. In addition to her dad, grandfather and uncle, her sister, Christy Hamilton began as an exercise rider and is now an assistant to trainer Steve Asmussen. Christy was previously married to Thoroughbred rider, Quincy Hamilton.

“Horsemen of today don’t give enough credit to the horsemen of yesterday,” she stated. “I will always listen to my dad and uncle. Plus, I am training a horse for my 87-year-old grandfather, Billy “Chief” Burress. Gospel Glamour is doing well and will probably run by the end of the month.”

She and Juan own a home in Princeton, Louisiana, chosen for its good school system. Burress has done well with her claiming and lower level allowance runners and would love to have a few stakes-caliber horses in her barn. However, she never wants to get so big that she is unable to work one-on-one with each runner.

“I think about renaming my stable one day and calling it the ‘Hands On Stable'”, she said. “As each horse leaves the barn and heads to the racetrack, they would pass by me holding a bucket of white paint. I would leave a nice white handprint right on their butt!”

A hard worker with a wonderful sense of humor. It’s hard not to root for this affable horsewoman.