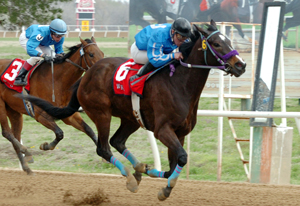 Scattered Acres LLC’s Foreign Sultress, a 4-year-old filly by Foreign Policy, scored a 10-1 upset in the $55,000 Cherokee Casino Will Rogers Downs Classic Distaff Sprint Stakes for Oklahoma-breds on April 8 at the Claremore track. Benny Landeros rode for trainer Andy Gladd. She clocked six furlongs in 1:11.43 and won by 2 ¼ lengths.

Bred by Bob and Paulette Pogue out of the Dixie Brass mare Sultress of Swing, Foreign Sultress has compiled a record of 14-5-3-1 with earnings of $100,494 while racing exclusively in Oklahoma. She broke her maiden at Will Rogers last year and then picked up a win at Fair Meadows before winning twice more at Remington Park. She kicked off her 4-year-old season with a runner-up effort in a Will Rogers allowance race before earning her first career stakes win in the Distaff Sprint.

Richter Family Trust’s homebred Jazzin’ Okie, a daughter of Candy Ride (Arg) who won last year’s Wilma Mankiller Memorial Stakes at Will Rogers, got up to finish second as the favorite with Jose Medina up for trainer Kenneth Nolen.

Diamond Disco, a homebred running for 7 Cedars Farm, closed to take third with Garrett Steinberg aboard for conditioner Clinton Stuart. The filly is by Oklahoma stallion Diamond, a son of Mr. Prospector who stands at Oklahoma Equine.