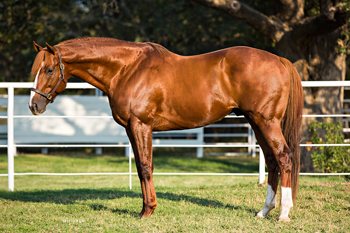 Texas stallion Preferred Issue was represented by his first winner on February 27 as his son Unbridled’s Issue scored in a maiden special weight race at Fair Grounds. The 3-year-old gelding was bred in Texas and runs for Richard and Susan Couron’s Couron Farms LLP. The Courons also stand Preferred Issue, a son of Giant’s Causeway, at Keen Farms in Burleson, Texas, for a fee of $500.

Ridden by Richard Eramia for trainer Dallas Keen, Unbridled’s Issue went wire-to-wire in the 1 1/16-mile turf event for a $37,000 purse. The gray/roan gelding stopped the timer at 1:44.78 and boosted his lifetime earnings to $34,510. Unbridled’s Issue had hit the board in his four prior starts with three thirds at Fair Grounds and a second-place effort in his racing debut at Canterbury Park.

A $420,000 Keeneland yearling, Preferred Issue is from the family of noted sire Belong to Me and out of the Mr. Prospector mare Be a Prospector. The 9-year-old stallion is a half brother to stakes winner and graded stakes placed Away, who is the dam of Grade 2 winner and Kentucky Derby (G1) runner-up Eight Belles.