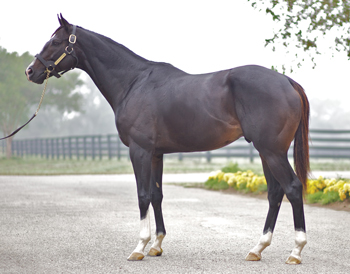 Texas stallion Grasshopper was represented by his first winner on Sunday as his Texas-bred son Forte Feroce rolled to an easy victory at Emerald Downs near Seattle. The 2-year-old gelding, who was bred by Ed Few and runs for J.C. Racing Stable, drew clear to win his racing debut by 4 ¾ lengths in an $18,350 maiden special weight event. Trainer Jeffrey Metz purchased Forte Feroce for $15,000 at the Fasig-Tipton Texas 2-Year-Olds in Training Sale. Forte Feroce is out of the Texas-bred Dove Hunt mare Catarina Ranch, who hit the board in a division of the Texas Stallion Stakes and an open stakes at Fair Grounds in 2008.

A son of Dixie Union who stood the 2014 season for a $3,500 fee at Lane’s End Texas near Hempstead, Grasshopper earned $848,852 in his career with a record of 21-5-6-2. He won the Grade 3 Mineshaft Handicap at Fair Grounds and placed in six other stakes, including the Grade 1 Whitney Handicap and Travers Stakes. In the Travers at Saratoga, Grasshopper was beaten just a half-length by Kentucky Derby winner Street Sense. Grasshopper is out of the unraced Mr. Prospector mare Grass Skirt, who has produced two other stakes winners by Dixie Union, including Delta Jackpot (G3) winner Turf War.