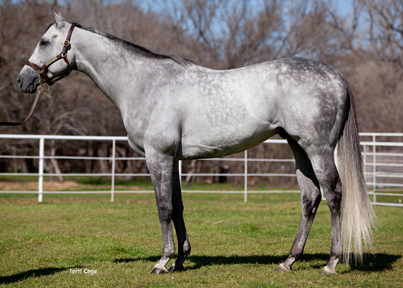 Former Texas stallion Unbridled’s Heart, who passed away last year due to complications from colic, was represented by his first winner on Valentine’s Day when his daughter Big Hearted Gal captured a maiden claiming race at Fair Grounds. Owned and bred in Texas by Eugene Jupe, the 3-year-old gray/roan filly prevailed by two lengths in the one-mile event with James Graham aboard for trainer Dallas Keen.

Unbridled’s Heart, a son of Unbridled’s Song who sold for $1 million as a yearling, broke his maiden at first asking and posted a 101 Beyer Speed Figure in a 10-length romp on the main track at Belmont Park. He went on to score two more wins on the turf along with stakes placings at Belmont and Lone Star Park.

The stallion stood as property of Ian Yarnot at Double Infinity Ranch after previously standing at Keen Farms.