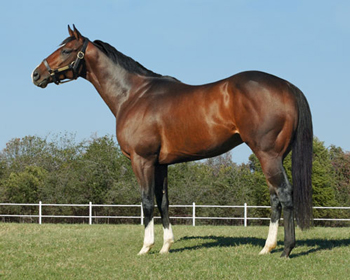 Mr. Nightlinger was represented by his first stakes winner on Friday night at Remington Park as his gelded son Lingerlonger produced a dominating eight-length victory in the $85,500 Oklahoma Classics Juvenile Stakes. Bred and owned by Hal Browning and David Faulkner, the Oklahoma-bred earned $51,300 for the win to extend Mr. Nightlinger’s advantage as the leading freshman sire in the state.

Ridden by Curtis Kimes and trained by Kari Craddock, Lingerlonger broke his maiden in his previous start with a 3 ¼-length victory against special weight foes at Remington. His earnings now stand at $72,111 after three starts.

“I watched Mr. Nightlinger race many times and he was faster than fast on dirt and grass,” said co-owner Faulkner. “I’ve got the full-brother to this colt at home so we went right back to him. This makes it all worthwhile and you have to enjoy these wins when they come.”

Mr. Nightliner, who stands at JEH Stallion Station in Oklahoma, won 10 of 25 career starts with five stakes wins and six stakes placings. While most of his success came in turf sprints, the Indian Charlie stallion proved his versatility on the main track and ability to go around two turns with placings in the Grade 3 Lone Star Derby at 1 1/16 miles and the Pomona Derby at 1 1/8 miles.

Mr. Nightliner, who stands as property of Martin Racing Stable LLC and Carl Moore Mgmt. LLC, has four winners to date from his first crop to hit the track.