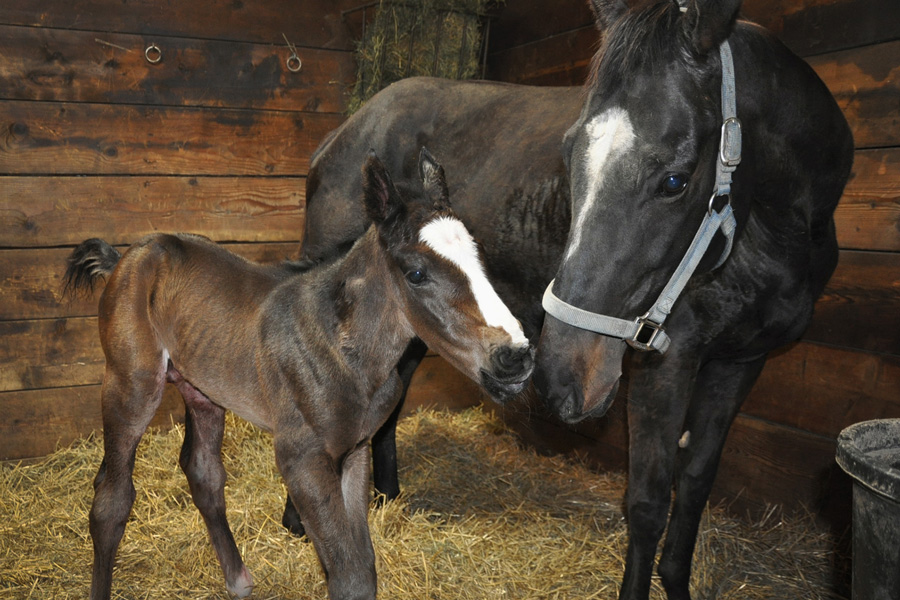 One More Strike, a 7-year-old daughter of Smart Strike, delivered a colt by Triple Crown winner American Pharoah at 3:30 a.m. Sunday, May 6, 2018. The foal was born at Dean and Teresa Benson’s Wood-Mere Farm in Webster, MN for owners Suzanne Stables.

“We’re very pleased with the colt. He’s everything we hope for; he’s big, correct, and has a lot of energy.” Teresa said. “One More Strike is nursing great and doing quite well.”

From the second crop of American Pharoah, the colt is the first ever Minnesota-bred sired by a Triple Crown winner.

Breaking her maiden in her second start, One More Strike’s racing career was highlighted with a victory in an allowance at Kentucky Downs in her final start. She retired with career earnings of $122,915.

Suzanne Stables purchased One More Strike as a maiden in foal to Uncle Mo for $150,000 from the Keeneland January Horses of All Ages Sale in 2016. That foal, now a 2-year-old, is a colt named El Tizar. Her second foal, Muskyman, is a yearling colt by Congrats. All foaled in Minnesota.

One More Strike is out of Julia Tuttle, a stakes winning and Grade 3 placed daughter of Giant’s Causeway. Her second dam, Candy Cane (ARG), is a full sister to leading sire Candy Ride (ARG).