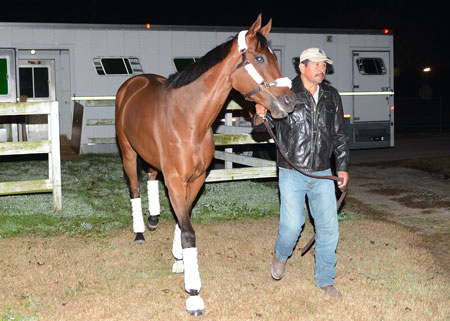 When Sam Houston Race Park officials were looking to enhance the status of their 2013 Thoroughbred meeting, one idea quickly became the logical frontrunner. As fillies and mares have dominated the Thoroughbred racing landscape with superstars like Zenyatta, Rachel Alexandra, Havre De Grace and Royal Delta making headlines, officials decided to create a new event at the beginning of the meet to showcase the ladies.

On Saturday, January 26, the inaugural running of the $400,000 Houston Ladies Classic at a distance of a mile and one-sixteenth, will take place with a spectacular field of fillies and mares. The entrants each have impressive résumés and graded stakes starts in premier races including the Grade 1 Kentucky Oaks. The combined earnings of the six fillies and mares exceeds $2.3 million.

She’s All In has earned $766,605 for trainer Donnie K. Von Hemel. The 6-year-old mare owned and bred by Robert H. Zoellner at his Rockin’ Z Ranch in Oklahoma, has stamped her name in the Remington Park history books, winning nine races there including the last three runnings of the $128,000 Oklahoma Classics Distaff. Regular rider Luis Quinonez will make the trip to Houston to pilot the daughter of Include, who was honored as 2010 Oklahoma Horse of the Year.

“After her Oklahoma Classic win (on October 19), we gave her a little time off,” said Von Hemel. “We have had this Houston stakes in mind all along.”

While she has done most of her winning close to the pace, Von Hemel knows she can adapt if need be.

Trainer Larry Jones has high hopes for Joyful Victory, an Ontario-bred daughter of Tapit owned by Fox Hill Farms, Inc.  She won the Grade 3 Honeybee and Grade 2 Fantasy Stakes at Oaklawn Park before running fourth in the 2011 Kentucky Oaks. Her 4-year-old campaign was highly respectable with second and third-place finishes in five graded stakes. Her last win was in February 2012, and Jones is looking for a reversal on Saturday evening.

“She had some good results last year, although it was kind of unfortunate that she only managed one win,” said Jones. “There will be little issues, here and there, but she is training well.”

Jones and Rick Porter of Fox Hill Farms are the men behind the great Havre de Grace, who earned $2.6 million in her career. Jones came to Houston in 2008 to run Honest Man in the Maxxam Gold Cup and Buy the Barrel in the Sam Houston Distaff. Buy the Barrel emerged victorious over 10 fillies in the Distaff.

“Seems like we have good luck with our fillies,” acknowledged Jones.

Rosie Napravnik, the top female rider in the country who concluded 2012 as the eighth-leading jockey in North America, will ride Joyful Victory.

Summer Applause, who made her last start in the 2012 Kentucky Oaks, is on the comeback trail for owners Gillian S Campbell and Greenwood Lodge Farm in Kentucky. Conditioner Bret Calhoun reports that the well-bred daughter of Harlan’s Holiday is training forwardly for her return. She covered five furlongs in 49.4 seconds on Saturday, January 12 and will be ridden by Miguel Mena.

Trainer Eddie Kenneally will run Brushed by a Star, a 5-year-old by Eddington. The well-traveled mare racked up four wins in 2012, with stakes wins in Grade 2 Molly Pitcher at Monmouth Park and the Chilukki Stakes last November at Churchill Downs. Regular pilot Corey Lanerie, who was the leading rider at Sam Houston Race Park in 1995 and 1996, has the call.

“She shipped in with no issues,” said Kenneally. “She is a very nice mare. In her last race (Falls City Handicap on November 22), she got shuffled back, but overcame her bad start and still finished well. This mare likes to run pretty close to the pace; Corey knows her and rode her in her last two.”

Gary Barber, the owner of Sisterly Love, saw so much upside in the Bellamy Road mare that he supplemented her to the Houston Ladies Classic for $10,000. The Kentucky-bred 5-year-old is a perfect three-for-three since breaking her maiden last October at Calder Race Course. She won an allowance on December 2 and a $62,500 allowance optional claiming race at Gulfstream Park three weeks later, drawing off by 2 1//2 lengths. Jockey Luis Saez will make the trip from Florida.

Sisterly Love is trained by top Canadian horseman Mark Casse, who was recently announced as a finalist for Outstanding Trainer for the 38th Annual Sovereign Awards, Canada’s version of the Eclipse Awards.

“We’re taking a humongous step up,” admitted Casse. “We’ve only had her for a month, but she trains like a good horse. She will van over today from Ocala with Lockout (who will run in the Connally Turf Cup).”

“We are very proud of the top caliber field in the Houston Ladies Classic,” said Eric Johnston, Sam Houston Race Park’s vice-president of racing. “Each of our four stakes for this exceptional evening drew competitive fields with nationally prominent horses and racing connections. This will be a historical night for Sam Houston Race Park.”

Advance wagering for the January 26 card will be offered on Friday, January 25 and Sam Houston will offer a new wager, “The All-Stakes Pick-4”.

Promotions Lend Excitement to Saturday Evening
In honor of the $400,000 Houston Ladies Classic, Sam Houston Race Park has joined forces with the Houston affiliate of the Susan G. Komen For the Cure® and will donate $1 for each patron to benefit the esteemed charity.

Patrons can also show their support for the fight against breast cancer by entering the “Think Pink Hat Contest”, presented by Cadence Bank. Registration will begin at 5:00 p.m. on the Club Level of the Grandstand. The judging will take place at 7:30 p.m. and the winner will receive $500.